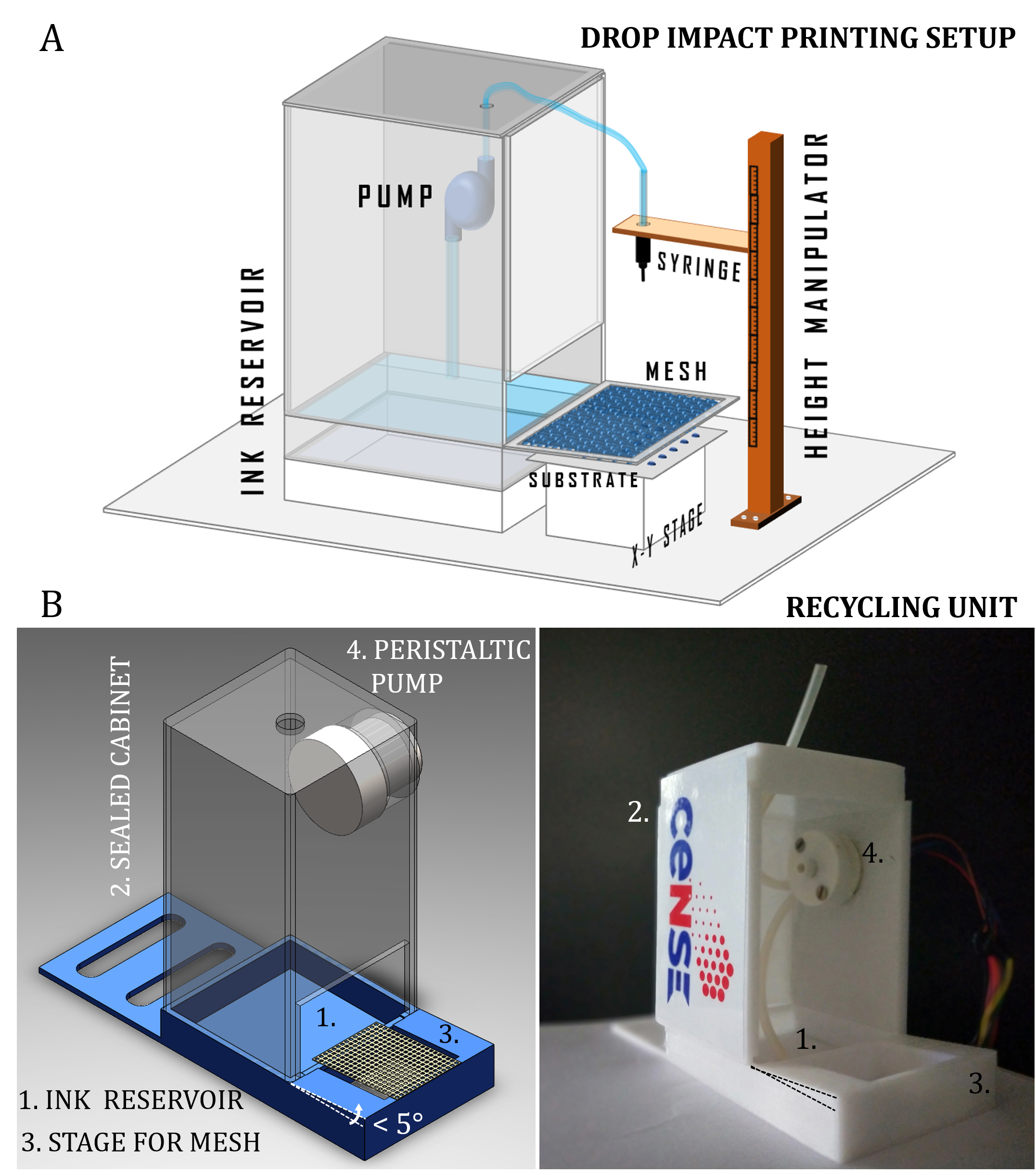 Researchers at the Centre for Nano Science and Engineering (CeNSE), IISc, have developed a low-cost, drop-on-demand printing technique capable of generating a wide range of droplet sizes using a variety of inks. Apart from traditional printing, it could also potentially be useful for 3D printing of living cells, ceramic materials, electronic circuits and machine components.

Printers used currently ‒ from inkjet printers to bio-printers that dispense living cells ‒ have a nozzle with a small opening to eject droplets. However, particles in the ink or a cell suspension can clog the opening, which limits the amount of particles or cells that can be loaded initially. Consequently, the thickness of the layer that can be printed is also limited.

The new technique replaces the nozzle with a mesh covered with chemically treated nanowires that repel water. When a large droplet impacts on this mesh, it bounces back. However, a small part of the liquid is ejected through the mesh pore as a jet that breaks to create a micro-scale droplet, which is then printed onto a surface.

Because of the short contact time of the impacting droplet with the mesh (about 10 ms), the particles in the ink do not get a chance to clog the mesh pore, the researchers say. This allowed them to load the ink with larger quantities of nanoparticles, enabling printing of very thick lines in a single cycle. The mesh can also be easily cleaned and reused.

“The mesh costs only a small fraction of the nozzles that it replaces. This significantly reduces the operational cost when compared to conventional printing techniques,” says Prosenjit Sen, Associate Professor in CeNSE and senior author of the study published in Nature Communications.

“This was the first hint that some mechanism was playing a role in focusing the kinetic energy,” says Chandantaru Dey Modak, first author and PhD student at CeNSE. “At this point, we started asking the following questions: What is this focusing mechanism? Can this mechanism be exploited to reliably generate single microscale droplets?”

The team captured high-speed videos (50,000 to 80,000 frames per second) of these impacting droplets, and found that an air cavity was being formed at the droplet centre. During the recoil phase of the impact, this cavity collapsed, focusing all the kinetic energy into a single point, resulting in the generation of individual droplets. No “satellite” droplets ‒ secondary droplets that result in unwanted scatter ‒ were generated. The size of the droplets ejected could also be tweaked by adjusting the pore size of the mesh.

The researchers were able to demonstrate the use of this technique for various applications. “Using drop impact printing, we could print 3D pillars of different sizes, an electronic circuit for semiconductor device applications, and bio-based droplet arrays for cell culture,” says Modak. “The capability to print a wide range of droplet sizes while using different kinds of inks for different applications makes this technique unique.”