Biographies : Remembering Sir J C Bose
– D. P. SENGUPTA, National Institute of Advanced Studies, Bengaluru
– M.H. ENGINEER, Bose Institute, Kolkata
– V.A. SHEPHERD, University of South Wales, Sydney, Australia
ISBN 978-981-4271-61-5 | Price: INR 1395, $61
First published in 2009 | Hardcover | 224 pages
Co-publisher: World Scientific Publishing Company
This book covers Bose’s life in colonial India, including the general patriotic environment that pervaded at the time and how he became one of the flag bearers of the Bengal Renaissance. It also examines the scientific achievements of this polymath and his contributions to physics and plant electrophysiology, while highlighting his philosophy of life. Climbing the Limitless Ladder A life in Chemistry
– CNR RAO, Jawaharlal Nehru Centre for Advanced Scientific Research (JNCASR), Bengaluru
ISBN 978-981-4307-86-4 | Price: INR 695, $31
First published in 2010 | Paperback | ix+222 pages
Co-publisher: World Scientific Publishing Company
“Reading his autobiography, what come out clear as the message is: “doing science is a way of life”.
– D. Balasubramanian, The Hindu, August 25, 2010
“Rao’s autobiography titled ‘Climbing the Limitless Ladder: A Life in Chemistry’ is worth reading by every aspiring scientist and all those interested in scientific
research and education”.
– Subhodh Mahanti, Dream 2047, Vol. 16, No. 6, March 2014
“This highly readable autobiography establishes that although Rao has already scaled many a pinnacle in his field of research, he is not inclined to cease his labour. Indeed, now he gazes at other and greater heights”.
– Palle Rama Rao, former secretary, Department of Science and Technology, and former
chairman, Atomic Energy Regulatory Board, Business Standard, September 23, 2010 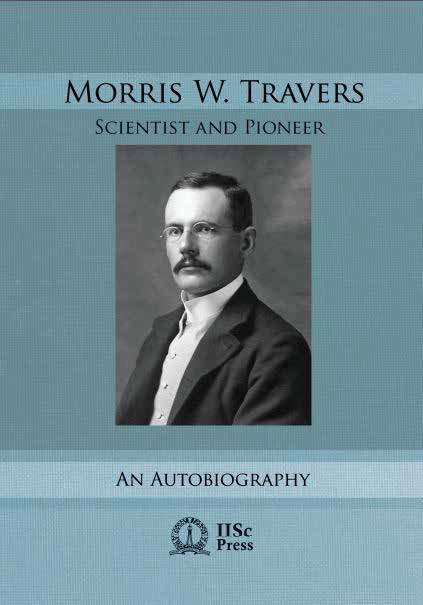 Biographies : Morris W. Travers: Scientist and PioneerAn Autobiography
– Edited by DAVID M. W. TRAVERS and JOHN R. AINSLIE
ISBN 978-81-925707-3-0 | Price: INR 1200
First published in 2017 | Hardcover | 470 pages
“…visually attractive, readable and accessible…”
– Ramachandra Guha, Historian
“IISc founding director’s autobiography offers a rare glimpse into
the past”
– Divya Shekhar, The Economic Times, 20 February 2017
An Autobiography of Dr Morris W. Travers (Edited by his grandsons), who was the Founding Director of the Indian Institute of Science, Bangalore, who fought for educational policies that ensured its success as the centre of Indian scientific learning and research. He was born in Kensington, London, England in 1872. He attended University College, London where he studied chemistry under Sir William Ramsay. Together they discovered three new elements Neon, Krypton and Xenon. Dr Travers then went on to teach at University College, Bristol, where he became a leader of the university movement that promoted the creation of the University of Bristol from the College and other educational institutions in the city. At the end of his term at IISc as the first Director, he returned to England where he was given a life appointment at the University of Bristol in appreciation of his founding leadership.