Many interesting and important real life problems are modelled using ordinary differential equations (ODE). These include, but not limited to, physics, chemistry, biology, engineering, economics, sociology, psychology etc. In mathematics, ODE has deep connection with geometry, among other branches. In many of these situations, we are interested in understanding the future, given the present phenomenon. In other words, we wish to understand the time evolution or the dynamics of a given phenomenon. The subject field of ODE has developed, over the years, to answer adequately such questions. Yet, there are many important intriguing situations, where complete answers are still awaited.

The present book aims at giving a good foundation for a beginner, starting at an undergraduate level, without compromising on the rigor. The present book is written in such a way that the contents of the first few chapters can be used for an undergraduate course on ODE, in universities. As the students get more acquainted with basic analysis and linear algebra, the book can also be used at the graduate level course. Wherever possible, the authors have made the presentation in such a simple way that even students at undergraduate level, can easily follow the advanced topics, such as qualitative analysis of linear nonlinear systems, in the book. ILNS 1: Introduction to Algebraic Geometry and Commutative Algebra , Authors: Dilip P. Patil and Uwe Storch Year of Publication: 2010 Number of pages: 207 (Paperback) Price : $73
About the book : This introductory textbook for a graduate course in pure mathematics provides a gateway into the two difficult fields of algebraic geometry and commutative algebra. Algebraic geometry, supported fundamentally by commutative algebra, is a cornerstone of pure mathematics. Along the lines developed by Grothendieck, this book delves into the rich interplay between algebraic geometry and commutative algebra. With concise yet clear definitions and synopses a selection is made from the wealth of material in the disciplines including the Riemann-Roch theorem for arbitrary projective curves. ILNS 2: Title: Schwarz’s Lemma from a Differential Geometric Viewpoint, Authors: Kang- Tae Kim and Hanjin Lee, Year of Publication: 2011 Number of Pages: 82 (Hardbound) Price: $ 50
About the book: The subject matter in this volume is Schwarz’s Lemma which has become a crucial theme in many branches of research in mathematics for more than a hundred years to date. This volume of lecture notes focuses on its differential geometric developments by several excellent authors including, but not limited to, L. Ahlfors, S.S. Chern, Y. C. Lu, S. T. Yao and H. L. Royden. This volume can be approached by a reader who has basic knowledge on complex analysis and Riemannian geometry. It contains major historical differential geometric generalizations on Schwarz’s Lemma and provides the necessary information while making the whole volume as concise as ever. ILNS 3 : Title: Noise and Vibration Control, Author: M L Munjal, Year of Publication: 2013 Number of pages: 277 (Hardbound) Price: $ 55
About the book: Vibration and noise are two interrelated terms in the field of mechanical engineering. Vibration is caused by unbalanced inertial forces and moments whereas noise is the result of such vibrations. Noisy machines have always been a matter of concern. Lesser vibration ensures manufacturing to closer tolerances, lesser wear and tear, and longer fatigue life. Hence, a quieter machine is more cost-effective in the long run. It is now well understood that a quieter machine is in every way a better machine. This book deals with such industrial and automotive noise and vibration, their measurement and control. This textbook stresses on physical concepts and the application thereof to practical problems. The author’s four decades of experience in teaching, research and industrial consultancy is reflected in the choice of the solved examples and unsolved problems. The book targets senior undergraduate students in mechanical engineering as well as designers of industrial machinery and layouts. It can readily be used for self-study by practicing designers and engineers. 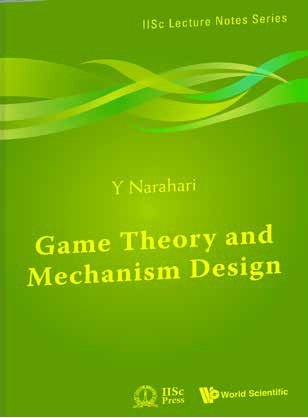 ILNS 4 : Title: Game Theory and Mechanism Design, Author: Y Narahari, Year of Publication: 2014, Number of pages: 492 (Hardbound) Price: $ 148
About the book : This book offers a self-sufficient treatment of a key tool, game theory and mechanism design, to model, analyze, and solve centralized as well as decentralized design problems involving multiple autonomous agents that interact strategically in a rational and intelligent way. The contents of the book provide a sound foundation of game theory and mechanism design theory which clearly represent the â€œscienceâ€ behind traditional as well as emerging economic applications for the society. The importance of the discipline of game theory has been recognized through numerous Nobel prizes in economic sciences being awarded to game theorists, including the 2005, 2007, and 2012 prizes. The book distills the marvelous contributions of these and other celebrated game theorists and presents it in a way that can be easily understood even by senior undergraduate students. A unique feature of the book is its detailed coverage of mechanism design which is the art of designing a game among strategic agents so that a social goal is realized in an equilibrium of the induced game. Another feature is a large number of illustrative examples that are representative of both classical and modern applications of game theory and mechanism design. The book also includes informative biographical sketches of game theory legends, and is specially customized to a general engineering audience. After a thorough reading of this book, readers would be able to apply game theory and mechanism design in a principled and mature way to solve relevant problems in computer science (esp, artificial intelligence/machine learning), introduce Internet and network economics, computer engineering, operations research, industrial engineering and microeconomics. 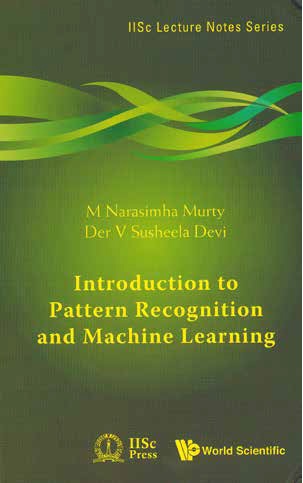 ILNS 5: Title: Introduction to Pattern Recognition and Machine Learning, Author: M Narasimha Murthy and V Susheela Devi, Year of Publication: 2015, Number of pages: 383, Price: 34,95 €ISBN 978-981-4335-45-4 | Price: $125
First published in 2015 | Hardcover | xiii+383 pages
Co-publisher: World Scientific Publishing Company
This book adopts a detailed and methodological algorithmic approach to explain the concepts of pattern recognition. While the text provides a systematic account of its major topics such as pattern representation and nearest neighbour based classifiers, current topics – neural networks, support vector machines and decision trees –
attributed to the recent vast progress in this field are also dealt with. Introduction to Pattern Recognition and Machine Learning will equip readers, especially senior computer science undergraduates, with a deeper understanding of the subject matter.
“The book contains a good overview of many issues in machine learning and introduces the reader to most of the essential topics of machine learning in an easily understandable manner.”
– PS Sastry, Department of Electrical Engineering, IISc, Current Science, Vol. 110, No. 7, 10 April 2016 The book presents several advanced topics including fourth-order tensors, differentiation of tensors, exponential and logarithmic tensors, and the their application to nonlinear elasticity. The implications of the Clausius-Duhem inequality, material symmetry, frame-indifference, and material and elastic stability of nonlinear hyperelastic materials are also discussed in detail.
C.S. Jog Professor at the Department of Mechanical Engineering, Indian Institute of Science, Bangalore. Having more than 20 years of experience in teaching and research, Jog has published more than 40 papers in various international journals. He teaches courses on solid mechanics, continuum mechanics, and the finite element method, primarily at postgraduate level. His research interests include continuum mechanics, elasticity, fluid-structure interaction problems and development of new finite element strategies. Fluid Mechanics: Foundations and Applications of Mechanics – Volume II by
– Chandrashekhar S Jog, Indian Institute of Science, Bengaluru
ISBN 978-1-107-09129-0 | Price: INR 1095
First published in 2015 | Hardback | iii+570 pages
Co-publisher: Cambridge University Press
This book discusses the subject of fluid mechanics in detail, and provides an in-depth treatment of the governing equations and engineering-related applications.
This volume starts by presenting a detailed summary of the governing equations including kinematics and balance laws. In presenting this summary, particular emphasis is placed on relatively recent topics such as restrictions imposed by the second law of thermodynamics, material frame-indifference, etc. It then shows how the equations for a wide range of important topics such as idea fluid flow, surface waves, laminar incompressible and compressible flows, low Reynolds number hydrodynamics, etc. can be derived by making suitable approximation to the most general form of the governing equations presented at the outset. The theory in each
chapter is illustrated by considering a number of examples and engineering-related applications. A number of advanced topics such as analytical solutions to steady and transient flows of incompressible fluids, and to the acoustic wave equation are covered in this book. 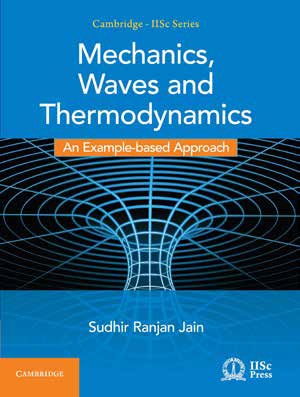 Mechanics, Waves and Thermodynamics by
– SUDHIR RANJAN JAIN, Homi Bhabha Atomic Research Centre, Mumbai
ISBN 978-1-107-14519-1 | Price: INR 595, US$69.99
First published in 2016 | Hardcover | xiii+209 pages
Co-publisher: Cambridge University Press
This book presents the fundamental concepts of classical physics in a coherent and logical manner. Besides elaborating the basic concepts of energy, mass, momentum and entropy, it also discusses topics like mechanics of single particle, oscillations and waves to enhance learners’ understanding. The unique feature of this book lies in the discussion on concepts such as central forces in the context of a recent spacecraft landing on a comet, Caratheodory’s axioms, applications of thermodynamics, understanding states of matter with the simple usage of Boltzmann factor, which are generally not found in books on classical physics. The concepts are
explained in detail with live examples and solved problems.
Classical theories are taught in all universities offering courses in Physics. This book is specially designed for undergraduate students of science and engineering.