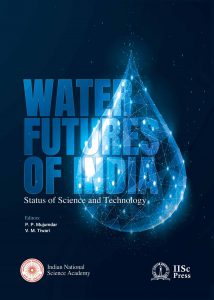 Water Futures of India by P P Mujumdar and V M Tiwari
About the Book : Status of Science and Technology is the result of an Indian National Science Academy (INSA) initiative to map the responsiveness of India’s science and technology to an impending water crisis. With contributions from eminent scientists and practitioners, the focus of the book is on science and technology issues; additionally, chapters also typically address relevant policy interventions.

The book opens with an overview of the current status of surface and ground water resources in the country, using data from secondary sources. Subsequent chapters cover tools for estimation, measurement and monitoring of water resources at various temporal and spatial scales. Snow and glacier hydrology, isotope techniques, groundwater prospecting and applications of remote sensing are covered in detail in individual chapters. Considerable progress has been achieved in the country in the fields of wastewater treatment technologies and desalination of seawater and brackish water to generate new sources of water. In the current and evolving scenario of acute water shortages in various parts of India, improving water-use efficiencies in coupled agriculture-climate systems and urban water distribution emerge as important themes, as a measure to optimally utilise resources. The book details existing knowledge in each of these areas. On a larger scale, hydrologic extremes of floods and droughts, river sedimentation, and climate change impacts on water resources are reviewed. The book concludes with a chapter on broad-level recommendations for policy interventions in the water sector.

The language in the chapters is kept simple and non-technical to the extent possible, to make it appealing to the general reader. The Story of Numbers by Asok Kumar Mallik
About the book: The Story of Numbers discusses various kinds of numbers and their curious interconnections without getting into hardcore mathematics. Starting from natural numbers, integers, real numbers, complex numbers and some special numbers like dual numbers, p-adic numbers etc. are introduced at an elementary level. Interesting anecdotes involving great mathematicians and their marvellous creations are included. 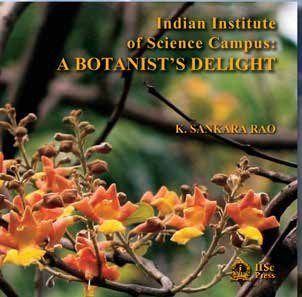 Indian Institute of Science Campus: A Botanist’s Delight
– K. SANKARA RAO, Indian Institute of Science, Bengaluru
Price: INR 1500
First published in 2008 | Hardcover | 224 pages
Indian Institute of Science Campus: A Botanist’s Delight is a modest attempt to portray the rich, colourful and fascinating plant life on IISc campus, which is both native and exotic. The book is meant to carry the message that by increasing awareness, it will help in the protection of plants –for the plants needs protection.
The species described in this book have been mostly represented by their flowers, but leaves and other identifying features are also shown in many instances. The text that accompanies each photograph gives the common name, Latin (botanical/technical) name and the natural group (family) to which the plants belong. The book, in all, reflects the enchanting beauty of plants for the pleasure of all plant lovers “Sankara Rao’s book describes the 200-odd plants and trees on the 320-acre campus”
– Divya Gandhi, The Hindu
“An admirable effort has been made by the author in producing an aesthetically appealing and scientifically accurate work; an elegant book”.
– HY Mohan Ram, Current Science, Vol. 97, No. 2, 25 July 2009 Secret Lives
– NATASHA MHATRE, University of Toronto, Canada
Price: INR 1500
First published in 2009 | Hardcover | 223 pages
Around the corner, underneath the tarred roads and between the steel and glass buildings, is a hidden world. A world of curious mongooses and parasitic wasps, a world of sluggish lorises, seductive plants and territorial snakes, a world teeming with life, which we pass by without noticing. In the heart of Bangalore, the oasis of greenery that is the Indian Institute of Science campus keeps this world alive and thriving. Armed with a camera, this book dives into the undergrowth to tell you, through a series of extraordinary photographs, the stories of the inhabitants of this world, the stories of their secret lives. 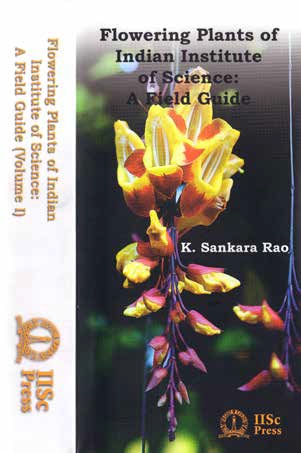 Flowering Plants of Indian Institute of Science:A Field Guide (Vol. I & II)– K. SANKARA RAO, Indian Institute of Science, Bengaluru
Price: INR 2100 (for a set of two)
First published in 2009 | Paperback | 950 pages
This field guide contains 700 and odd taxa in two volumes with images. The author has organized plants found on IISc campus by their habit and structure. Trees, shrubs and herbs, which make up the bulk of the entries in the book, are divided in two volumes. 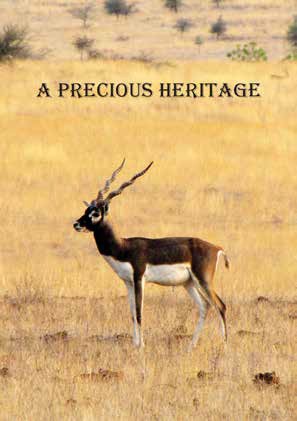 A Precious HeritageRapid Biodiversity Survey of the Kudapura Campus, Challakere
– ROHINI BALAKRISHNAN, Indian Institute of Science, Bengaluru
Price: INR 65
First published in 2012 | Paperback | 33 pages
This booklet is an outcome of a survey taken by a team of volunteers from IISc’s Centre for Ecological Sciences (CES). It documents the flora and fauna found on the new campus of the Indian Institute of Science in Challakere located in district Chitradurga, some 225 kilometers away from its Bangalore campus. SALAAM TO KALAMA Tribute to APJ
– Science Reporter
Avul Pakir Jainuladeen Abdul Kalam popularly called APJ Kalam was born on 15 October 1931 into a Tamil Muslim family in Rameswaram. He was the youngest child born to Ashiamma and Jainuladeen. Son of a ferry boat owner, Kalam did odd jobs to supplement the family’s income. The financial situation of his family though did not deter him from dreaming big.
After completing his schooling at Rameswaram, he moved to Tiruchirapalli for his graduate education and later to Madras Institute of Technology (MIT) for a course in his favourite subject – Aerospace Engineering. INDIAN INSTITUTE OF SCIENCE:THE JOURNEY THROUGH A CENTURY
– Text: Sowmithri Ranganathan | Editor: Manu Rajan, Indian Institute of Science, Bengaluru
Nestled under a canopy of trees in the heart of Bangalore is the Indian Institute of Science (IISc), a globally recognized and acclaimed premier Scientific Research Institute imparting knowledge to both scientists and engineers. This Institute has been the aspirational destination of generations of bright students passionate about scientific research. This is the second research Institute to be established in India, the first being the Indian Association for Cultivation of Science at Calcutta. Even though the benefactor himself did not want his name to figure anywhere, the Institute is locally referred to as the “Tata Institute”. Celebrating the LIFE OF A RARE GEMSir C.V. Raman – Director IISc 1933-1937
– Text: Sowmithri Ranganathan, Archives and Publication Cell, IISc
Karthik Ramaswamy, Division of Biological Sciences, IISc
All historical experience confirms the truths that man would not have attained the possible unless time and again he reached for the impossible.” Max Webber, the German philosopher, might have as well been talking about Sir C.V.Raman when he said these words Chemistry at The Indian Institute of ScienceONE HUNDRED YEARS OF BONDING
– Text: Sowmithri Ranganathan | Editor: Manu Rajan, Indian Institute of Science, Bengaluru
The special bond between the Indian Institute of Science (IISc), Bangalore, and chemistry exists not just because its first Director Morris Travers, was a chemist or because it was amongst the earliest departments to be established, but also because of the enormous contribution researchers from IISc have made to the world of chemistry.
Though the construction of the Main Building began in 1908, the foundation stone was laid only on 1 February, 1911 by the Maharaja. The first two years of the Institute,(1909 to 1911) saw the development of the infrastructure required for setting up the administrative offices, labs, library,classrooms, etc. 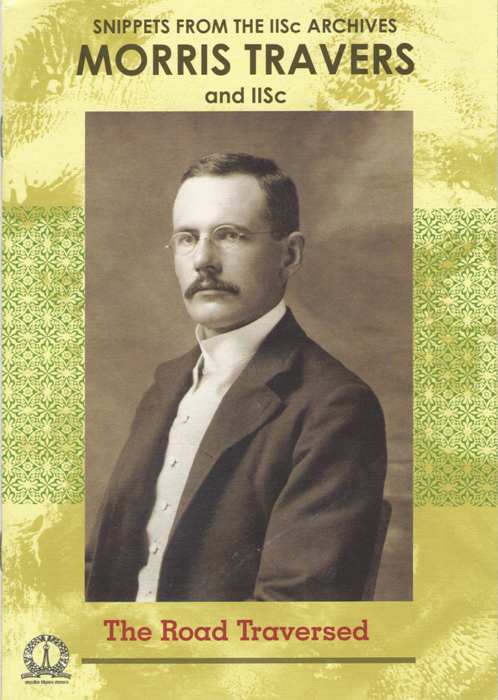 MORRIS TRAVERS and IIScThe Road Traversed
– Text: Sowmithri Ranganathan, Archives and Publication Cell, IISc
Editor: Manu Rajan, Archives and Publication Cell, IISc
Morris Travers was born on the 24th of January 1872 in Kensington, England. Travers, the second of William Travers and Anne Pocock, spent his warly childhood with a governess as both his parents were busy professionals. He was sent to Ramgate school when he was severs years old. Soon he moved to Woking schools and a year later to the Blundell’s schoool at Tiverton. Blundell’s, which later became a public schoo, was equipped with a very good chemistry lab. This is where Travers’ love for chemistry started. He worked in the well-equipped laboratory and won the Chemistry prize in the fifth form.