Honey Withering: Bacteria faces the first signalling in environment which determines its
pathogenecity

In a collaborative new study, researchers from IISc have unraveled mechanistic insights into the unique self-assembling drying pattern of bacteria suspended in pure water governed by various interactions such as bacteria-bacteria, bacteria-substrate and bacteria-liquid. The team was led by Saptarshi Basu, Professor at the Department of Mechanical Engineering and Dipshikha Chakravortty, Professor at the Department of Microbiology and Cell Biology. 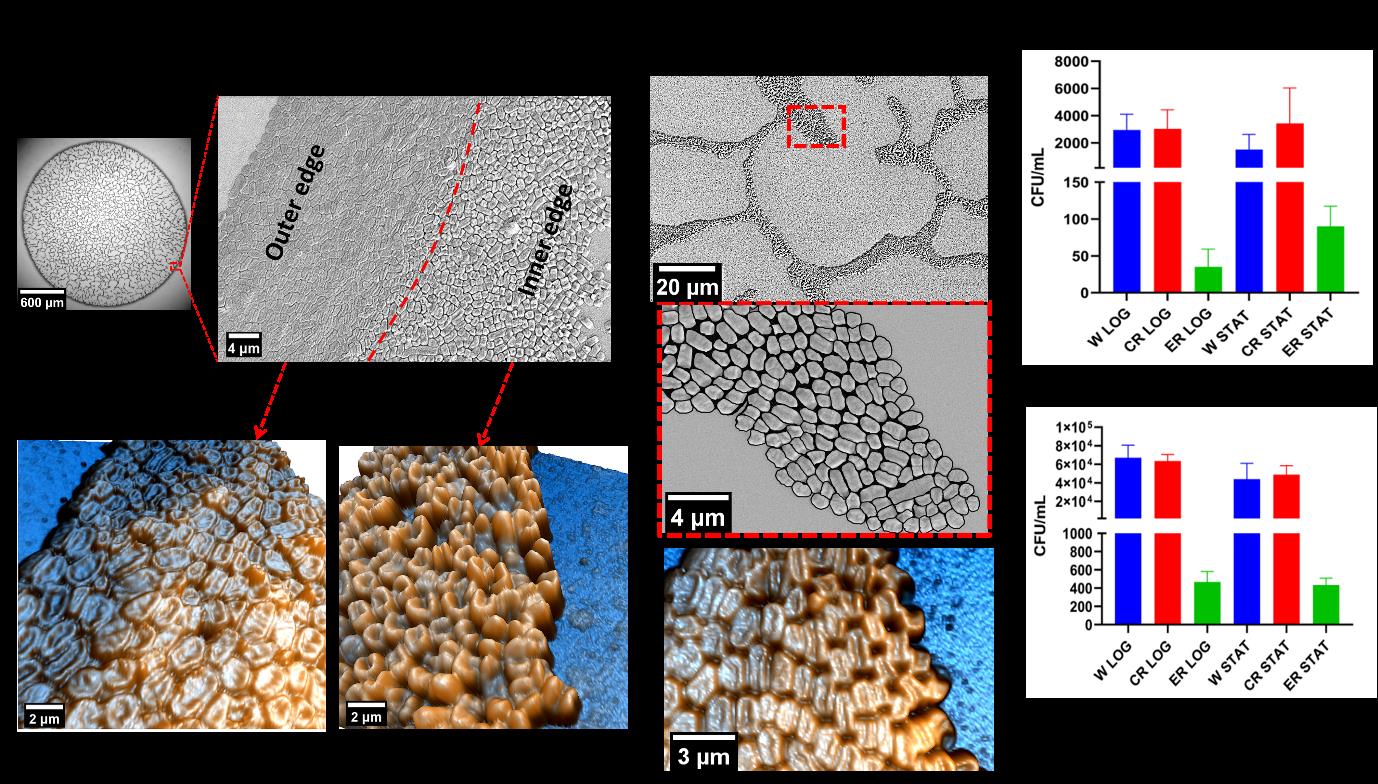 The forces acting upon the bacteria vary depending on the droplet’s spatial locations. The dehydration and sheer stress together act as induced stress on the pathogen in drying bio-fluids, thereby altering the viability and infectivity of the bacteria.

The researchers have investigated the flow and desiccation-driven self-assembly of Klebsiellapneumoniae (KP) in naturally evaporating sessile bacteria-laden droplets. Opportunistic bacterial pathogens like KPare known for their high antimicrobial resistance (AMR). Besides encountering host stress factors, bacteria also encounter various environmental stressors. One of them is bacterial transmission through aerosol and fomites. Bacteria inside droplets experience several physical stresses such as shear stress (due to fluid motion in the environment), starvation stress (due to lack of nutrients), desiccation stress (due to depletion of water from bacterial cell walls by evaporation), and stress due to harsh environmental conditions (fluctuating humidity and temperatures), to name a few. The bacteria-laden droplets in contact with any surface will eventually evaporate and lead to a drastic loss in viability of the bacteria due to desiccation at the end stage of evaporation. However, despite death due to desiccation, some bacteria continue to survive over weeks on inanimate dry surfaces.

The bacteria in the droplet undergo extensive morpho-topological (shape and size) changes, unravelingan extensive amount of fluid physics that govern the survival and infectivity of the bacteria facing those forces. With high-resolution imaging tools such as scanning electron microscopy and atomic force microscopy,the researchers have deciphered that the self-assembled bacteria at the droplet contact line are characterised by order-to-disorder packing transition with high packing densities and excessive deformations. On the other hand, thin film instability-led hole formation at the center of the droplet engenders spatial packing of bacteria similar to honeycomb weathering.

The authors report that the self-assembly favours the bacteria at the droplet’s rim, leading to enhanced viability and pathogenesis on the classic “coffee ring” of the droplet compared to the bacteria present at the center of the droplet residue. Bacteria packed closely experience lesser desiccation as their exposed area to the ambient environment is less. The above discussion is why the bacterium at the edge (of the droplet contact line) is more viable than that in the central regions. The bacteria in the droplet rim show higher virulence/infectivity than those in the droplet’s center as a score of higher-fold proliferation in murine macrophages (potent innate immune cells). In real biofluids and saline drying droplets, the increase in salt concentration causes osmotic shock, driving out water from the bacteria and resulting in death.

In contrast, in a hypotonic solution like pure water used in this study, lysis could cause death (by water intake and bursting). If bacteria survive the lytic process, water intake will help sustain the desiccation process longer than normal bacteria. The thin film instability leads to the rupture of the liquid film, and causes hole formation and growth, driving bacteria to come together and form cellular patterns. However, the gap between the bacteria is more in the central region, and the exposed area for desiccation is also higher. Thus, lesser viable bacteria are present in the central regions.

The mechanistic insights gained through this study can have far-reaching implications for understanding bacterial infection through droplets, for example, through open wounds.