Improving data storage is becoming increasingly urgent as enormous amounts of data are generated every second. Current technology using conventional magnetic systems is reaching its limits, and researchers across the world are intently searching for alternatives.

Quasiparticles called magnetic skyrmions, which have nanoscale non-coplanar spin configurations with twists, are a promising platform for ultra-dense, low-power memory applications. Other novel magnetic textures such as antiskyrmions and merons have also been observed, with different types of non-coplanar spin configurations, and are therefore equally promising. Realizing such non-coplanar spin textures in new materials and through new routes is of great interest in recent times. However, till date, this has been restricted only to magnetic materials which already possess localized magnetic moments.

Figure 1 (a) Topological Hall resistance as a function of magnetic field at various temperature from 2 to 40 K. (b) Momentum space spin texture in presence of a single oxygen vacancy

In a new study, IISc researchers led by Srimanta Middey, Assistant Professor at the Department of Physics, successfully demonstrate a new route to realize non-coplanar spin configuration in a non-magnetic system. 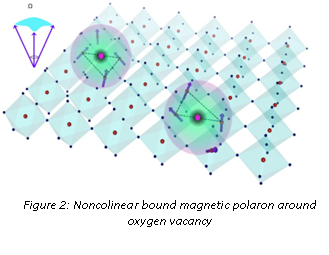 They achieved this by deliberately creating oxygen vacancies (OVs) in a non-magnetic band insulator called KTaO3. Creation of OVs turns pristine insulating KTaO3 into a metal. It leads to the formation of a non-coplanar network of magnetic moments around the OV (Fig. 2), resulting in the observation of a phenomenon called topological Hall effect. The researchers suggest that these design principles could be utilized to engineer more complex and stable spin structures in various quantum materials.