In a collaborative new study, researchers from IISc have demonstrated the generation of plasma-activated water (hs-PAW) containing H2O2, NO2−, and NO3− in high-strengths. The hs-PAW is capable of inactivating even hypervirulent multidrug resistant pathogens. The team was led by Lakshminarayana Rao, Associate Professor at the Centre for Sustainable Technologies and Dipshikha Chakravortty, Professor at the Department of Microbiology and Cell Biology. Their study, published in Plasma Processes And Polymers, shows that plasma-activated water is neutral, making it suitable for real-world bio-medical applications.

Atmospheric nonthermal plasma (NTP) interacts with water to the generate plasma-activated water. The air plasma‐water interaction forms various reactive oxygen and nitrogen species (RONS), some short‐lived and others long‐lived. The synergistic effect of long‐lived RONS (like H2O2, NO2−, and NO3−), is known to drive the bactericidal activity of PAW over extended periods (typically 1–2 weeks). Further, it is known that the contribution of NO2− and H2O2 toward bactericidal activity is stronger than that of the NO3− in plasma-activated water. Typically, a high concentration of long‐lived RONS species is believed to exhibit greater bactericidal activity and can also potentially target multidrug resistant (MDR) pathogens. Hence it is desirable to generate PAW having a high concentration of NO2− and H2O2, which was the focus of this study.

First, the researchers generated plasma-activated water (hs-PAW) using pin-to-water discharge with a funnel enclosure. For the water that needs to be exposed to the plasma, they maintained a low temperature (<300 K) using ice cubes. Computer models suggested that funnel enclosure increases the velocity and circulation within the funnel without allowing the reactive species to escape far away from the water surface, leading to increased species concentration in the plasma-activated water. Then, this activated water was exposed to different multidrug-resistant pathogens.

The studies revealed that the combined effect of the reactive oxygen and nitrogen species in hs-PAW is more effective than the water spikes with the desired species without plasma. The metabolic and the live-dead assay of multidrug-resistant pathogens revealed that the pathogens exposed to the hs-PAW had decreased metabolism.

The bactericidal activity on MDR was achieved using the hs-PAW having a neutral pH. The researchers also found that the hs-PAW stored up to 15 days could still retain its bactericidal activity against the pathogens. Further, they found that the RONS species in hs-PAW disintegrates the bacteria’s outer cell membrane by perforation, arresting the metabolic activity, eventually inactivating or killing the bacteria. This provides an opportunity to use the plasma-activated water in real-world medical applications such as wound healing.

Therefore, hs‐PAW can be considered an alternative method for tackling hard‐to‐treat multidrug‐resistant pathogens, according to the researchers. In further studies, they hope to understand hs‐PAW generation and its application as an alternative technique to study the developmental stages of hypervirulent bacterial pathogens. The team also hopes to further investigate the chemistry of RONS formation in water. 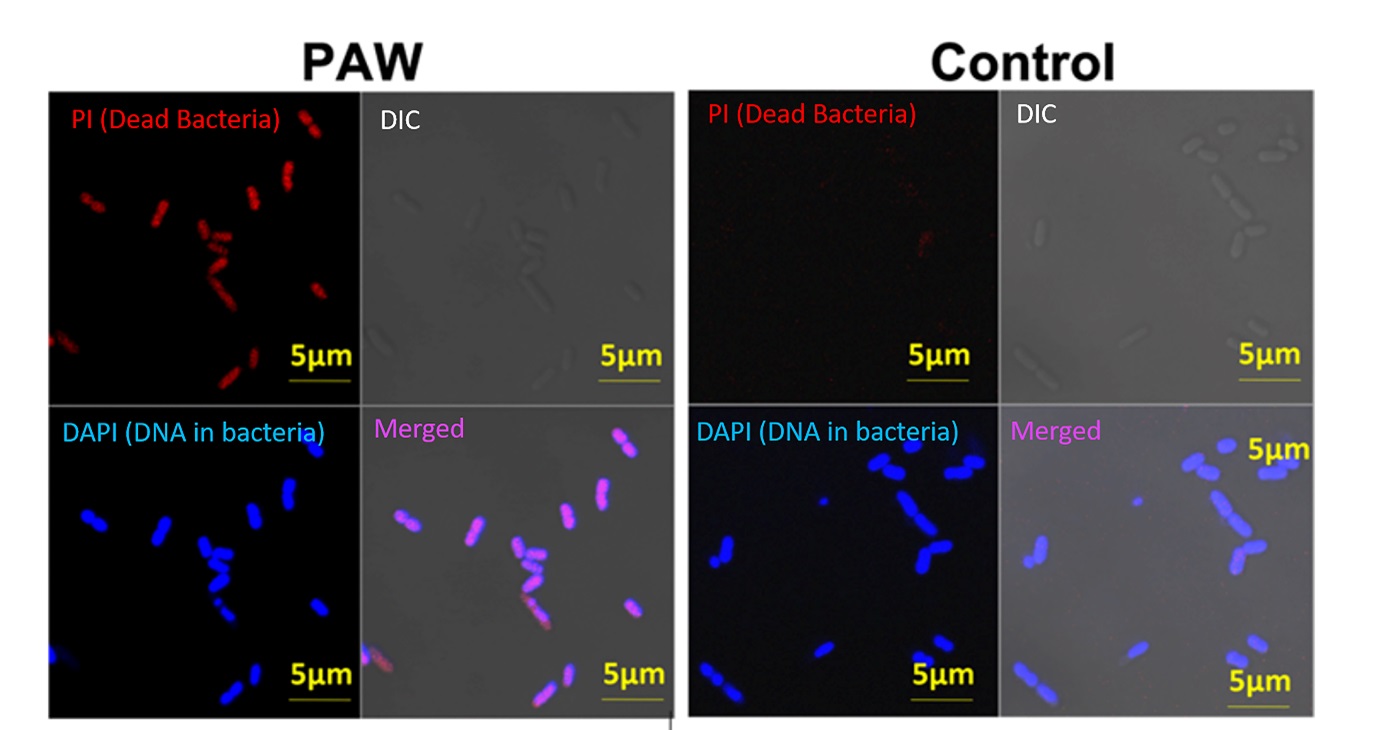