Fig.1: Nanoscale localization of amyloidogenic precursor protein att excitatory synapses indicating that APP is clustered in to subdiffraction limited zones where the molecules can be reversibly exchanged by lateral diffusion.

Alzheimer’s disease (AD) causes a severe reduction in higher cognitive abilities such as learning and memory. Extensive studies have linked AD to the improper breakdown of a protein called Amyloid Precursor Protein (APP) by enzymes called secretases, a process referred to as amyloidogenic processing. It results in an increased generation of peptides which can stick together to produce abnormal knots in the brain called plaques, causing memory loss. It has been postulated that Alzheimer’s disease starts as an illness of the synapse ‒ tiny junctions that allow neurons to talk to each other.

A research team at the Centre for Neuroscience has identified that out of hundreds of possible culprits, a snap in the molecular arrangement of major components of the amyloidogenic machinery, namely APP and secretases, at the synapses is a prime suspect for the onset of AD. The team, led by Deepak Nair created detailed maps of the organisation of APP and secretases in several thousands of synapses. They found that APP and secretases are clumped into high molecular density zones called “nanodomains” at synapses.

The team generated a blueprint of Alzheimer’s pathology, revealing the significance of the tiniest changes in APP clumping patterns or secretases as a trigger for the onset of AD. In one of the “Eureka” moments, the researchers found that similar to their observation in mice neurons, the clumping patterns of APP and secretases are also altered in brain tissues obtained from post-mortem human Alzheimer’s patients. These findings validated mathematical predictions, reinforcing the significant impact of minor changes on disease onset. The next steps would be to develop smart molecules to selectively target the clumped APP and secretases for developing effective therapeutics to treat AD. 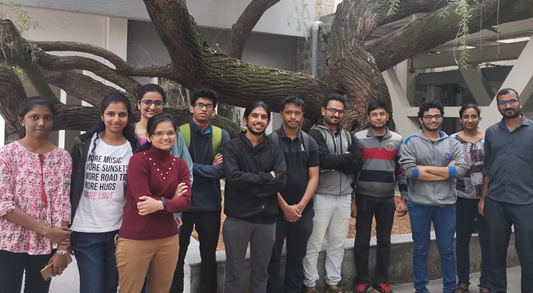