The Institute is in possession of 1500 acres of land allotted by the Government of Karnataka during 2009 in Challakere Taluk of Chitradurga District.  This second campus of IISc being set up in Kudapura village is officially known as  “Challakere Campus”.  It is 220 km away from Bangalore and takes about 4 hours to reach the campus.

Main Gate of the Challakere Campus of IISc

The construction of two check dams for harvesting rain water is completed. These are expected to serve as the major water bodies for vegetation and the fauna. These will also enhance the ground water level in the region, thus may serve as a step-in-aid for agriculture and allied activities. Two major research activities in the new campus are Solar Power  Research Center and the  Climate Observatory. These have been functional and in fact, some of the research done here have already been published in reputed journals. 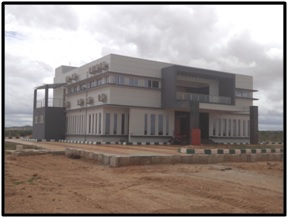 The Centre for Sustainable Technologies (CST) has commenced its activities under the project “C-BELT” i.e., the Centre for Bio-energy and Low-Carbon Technologies.  The proposed project work aims at dissemination and capacity building towards adopting and promoting low-C and biomass centric technologies developed by Centre for Sustainable Technologies (CST). Under this project initially funded by the State and followed by a CSR grant of HDFC, a number of training programmes for surrounding villagers as well as to those from a neighboring state have been completed.  The training and exhibition centres, dormitory and workshop have been built exclusively for this outreach project. 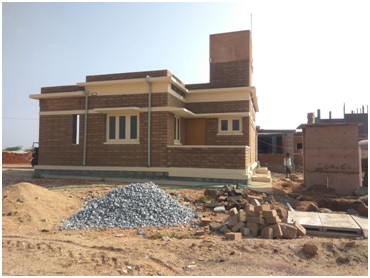 A building built by Sustainable Technology Centre under C-BELT

The Talent Development Centre is vigorously pursuing its novel programme of providing training for High Scholl Science Teachers, supported by the Government of Karnataka. In the past five years nearly 11000 teachers have been trained at the Centre and the impact assessment has shown very promising results.

The Ministry of Human Resource Development, Government of India has identified the IISc Challakere Campus as the Centre of Excellence in Science and Mathematics Education under the scheme “Pandit Madan Mohan Malaviya National Mission on Teachers & Teaching (PMMMNMTT)”. Under this scheme, the training of teachers from many other states as well as training teachers of higher institutions of science is undertaken and the teaching facilities have been augmented which includes an additional laboratory and a  lecture hall. More than 200 teachers at various levels have received training here.

The Institute has embarked on construction of Skill Development Centre and Hostel Blocks.    The entire project is being funded by HAL under CSR Act for which   the Institute has entered in to an MOU with HAL. The Skill Development Centre will extend the training to many different levels including some of the engineering disciplines of importance to manufacturing sector. 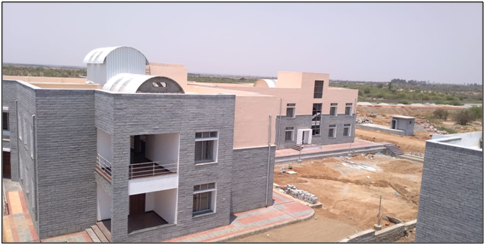 In the light of all the developments mentioned above, necessary support in terms of water and power supply had to be provided. The plan is to develop ‘first arc’  on the northern side of the campus covering about 215 acres. The major facilities mentioned above, namely the Solar Research Station, the Climate Research Centre, C-BELT and the Skill Development Centre and the associated hostel complex are all concentrated in this arc. Water and Power supply requirements described below pertain to this sector of the campus.

It is a matter of considerable relief that KUWSSB has already laid the pipeline for drinking water from Vani Vilas Sagar dam. The supply line covers Hiriyur and Challakere towns and further extended to the campuses of IISc, BARC and  DRDO. However, each institution has to construct internal water supply system including storage reservoirs, treating and pumping systems. CPWD was entrusted to build the water supply system consisting of three reservoirs, filtering and pumping station and the associated pipe lines. This work will be completed by May 2019. Similarly supply of electricity requires drawing power from Nayakanahatti station, building substations and building the internal network. The HT cables will be drawn in custom-built trenches all along the peripheral road in the first arc. It also requires widening of the road to a considerable extent. This work has also been entrusted to CPWD and is expected to be completed before the middle of 2019.

Concurrently efforts are made to greening the campus. With the initiative of the State Biofuel Board work is in progress to plant a few thousands of oil-yielding tree samplings. As an independent initiative, a nursery is being built to sustain the greening activities in the years to come.