Quantum entanglement ideas can be used to constrain theories of gravity. By implementing such ideas in the context of holography where a quantum theory sans gravity is equivalent to a quantum theory of gravity but in one higher dimension, one can get nontrivial constraints on the theory of gravity. For instance, demanding the positivity of relative entropy (roughly speaking something like the second law of thermodynamics), we found that the space of gravitational theories is large enough to accommodate not just Einstein’s general relativity (black dot in the picture on the right) but also deformations of the theory. Such deformations are not arbitrary but constrained in some parameter space. 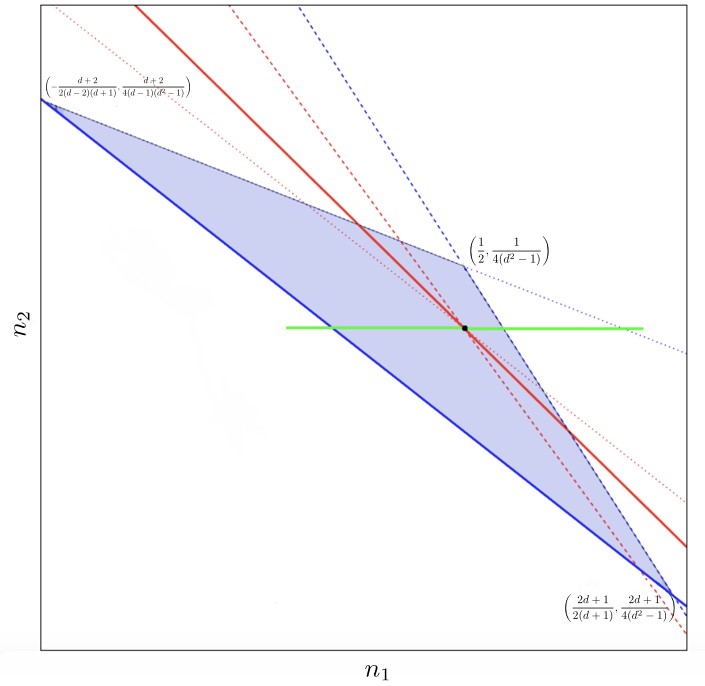 Figure: On the left a spin chain in one dimension is depicted using ideas based on continuous multiscale entanglement renormalization (cMERA). The orange surface is what is called the entangling surface and its area computes the entanglement entropy of the enclosed spins with the rest of the spins. In the middle, the same picture is shown in the holographic theory of gravity. The bulk is anti de Sitter spacetime. The entangling surface is a generalization of the black hole event horizon whose area gives the black hole entropy. On the far right, the parameter space of allowed theories of gravity are constrained using positivity of relative entropy. The black dot in the middle is Einstein gravity but more general deformations are allowed in principle.

Critical points, such as the one for the liquid-vapour transition of water (among many), have long been recognised to have universal behaviour with signature power law dependence for measurable quantities. In technical parlance, they are described as conformal field theories (CFTs) and possess enhanced symmetries (such as under a rescaling of lengths). An ambitious program of the 1970’s, revived recently, dubbed the conformal bootstrap, aimed to calculate all the properties of CFTs – the power laws as well as strengths of interactions – purely by exploiting these symmetries. My work in this area, using the framework of the so-called AdS/CFT duality in string theory, proposes an alternative analytical approach to bootstrapping the CFT. The building blocks here are Witten diagrams, which are Feynman diagrams of a gravitational theory in one higher dimensional AdS (Anti de Sitter) spacetime. The bootstrap consistency requirements, when framed in terms of momentum space like variables, give a novel set of conditions. Applied to the CFT that governs the critical point of water, these determine the power laws and, for the first time, interaction strengths, to high accuracy. This offers a calculationally simpler alternative to arduous Feynman diagram computations as well as a conceptually fertile connection with string theory. Figure: The usual expansion in quantum field theory in terms of Feynman diagrams is tedious and has ultraviolet divergences that have to be dealt with. The new method, which is manifestly finite, proposes to use a different basis in terms of a new set of diagrams. The method reproduces correctly old results and promises to be more powerful than existing approaches by producing new results which have never been computed using the Feynman diagram expansion.

The Shanti Swarup Bhatnagar Prize for the year 2019 in Physical Sciences has been awarded to Dr Aninda Sinha of Indian Institute of Science, Bengaluru, for his influential work on aspects of quantum field theory and string theory, in particular, on conformal bootstrap and entanglement entropy.

Some details about the prize can be found at https://currentaffairs.gktoday.in/shanti-swarup-bhatnagar-prizes-2019-09201997473.html