Another ancient frog from the Western Ghats

An international team of scientists has identified a new species of frog in the Western Ghats, once again highlighting the rich biodiversity of the region.

In 2010, a team from the Centre for Ecological Sciences, Indian Institute of Science (IISc), Bangalore, encountered a frog that they couldn’t quite identify. The expedition was part of a large-scale survey of the Western Ghats, led by SP Vijayakumar, then a PhD student, and Kartik Shanker, associate professor at IISc, to uncover the diversity of its reptiles and amphibians. They had developed a study explicitly designed to detect as many species as possible, by covering multiple elevations, rainfall regimes, habitats and hill ranges in their survey. While this worked really well in detecting even closely related species that looked very similar to each other, they were unable to place the new frog in a known group. The specimens were set aside for several years as researchers were focused on the frogs they were studying for their PhDs and postdoctoral projects.

Years later, Vijayakumar and Shanker turned their attention to these strange specimens again and put together an international team to identify the frog. Due to the frog’s complex evolutionary origins, strange morphological characteristics and confusing colour patterns, the team had a lot of work to do before they could be confident of its taxonomic affinities and announce the discovery of a new species. Since the species has no close relatives, the researchers had to carefully study its physical characteristics, bone structure, and evolutionary relationships to confirm its possible independent origin.

The discovery, published in the journal PeerJ, names the frog as Astrobatrachus kurichiyana: Astrobatrachus to highlight the starry spots on the side of its body and kurichiyana to honour members of the ‘Kurichiya’ tribal community of Wayanad in Kerala, where the specimens of this new species were found. The species has been assigned to a new sub-family Astrobatrachinae, its closest relatives being Nycibatrachinae (with the genus Nyctibatrachus) in the Western Ghats, and Lankanectinae (with the genus Lankanectes) in Sri Lanka. Even though many new species of frogs have been described from the Western Ghats over the last decade (and some have even been assigned to new genera), the discovery of a hitherto unknown species belonging to a new genus and a new sub-family is still rare. Molecular analysis suggests that the most recent common ancestor of this new species would have diversified around 60 to 70 million years ago.

The study reflects the value of collaboration. KP Dinesh, scientist at the Zoological Survey of India, Pune, provided the morphological description and comparisons. R Alexander Pyron, associate professor of biology at George Washington University, used his global dataset of frog genetic data to carry out phylogenetic analysis that helped identify the new frog’s closest relatives. David Blackburn, the associate curator of herpetology at the Florida Museum of Natural History, University of Florida, and Ed Stanley, associate scientist at the Museum, compared the skeleton of the frog with that of other species using specimens available on their openVertebrate project (oVert), an initiative to scan 20,000 vertebrates from museum collections. Varun R Torsekar’s extensive data on Nyctibatrachus, Achyuthan Srikanthan’s taxonomic illustrations and CT scans of skeletal structures, and Priyanka Swamy’s persistence in generating genetic data were all critical contributions to the final study. (Torsekar was a PhD student, and Srikanthan and Swamy are researchers, all in Shanker’s lab.)

Though Astrobatrachus is from peninsular India, the morphology of the frog (especially the triangular finger and toe tips) most closely resembles frogs from South America and Africa. As of now, this species is known only from the Kurchiyarmala peak of Wayanad. It is secretive and remains below leaf litter under the thick tree canopy of the shola forests in the region. The presence of Astrobatrachus and other ancient lineages from the southern Western Ghats highlights its role as a historical refugium, and as an important centre of diversification. There remains much to be learned, not just about this frog, but also others that might be hiding in these biodiversity-rich forests. 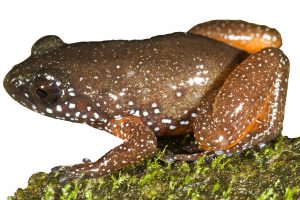