Quantum circuits, the building blocks of quantum computers, use quantum mechanical effects to perform tasks. They are much faster and more accurate than the classical circuits that are found in electronic devices today. In reality, however, no quantum circuit is completely error-free. Maximising the efficiency of a quantum circuit is of great interest to scientists from around the world.

Researchers at the Indian Institute of Science (IISc) have now addressed this problem using a mathematical analogue. They devised an algorithm to explicitly count the number of computing resources necessary, and optimized it to obtain maximum efficiency.

“We were able to [theoretically] build the most efficient circuit and bring down the amount of resources needed by a huge factor,” says Aninda Sinha, Associate Professor at the Centre for High Energy Physics, IISc, and corresponding author of the paper published in Physical Review Letters. The researchers also suggest that this is the maximum possible efficiency achievable for a quantum circuit. 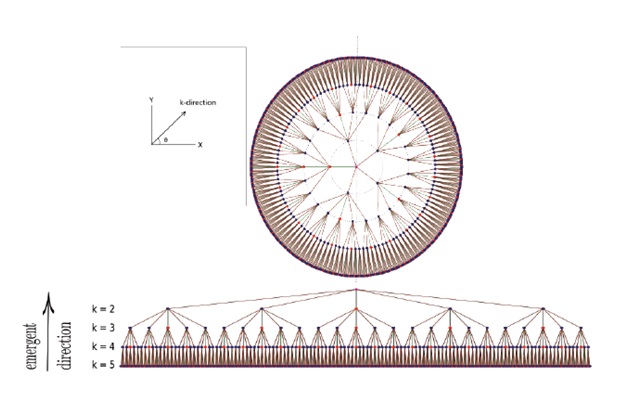 Optimizing quantum circuit efficiency is useful in various fields, especially quantum computing. Not only will quantum computers give faster and more accurate results than classical computers, they will also be more secure ‒ they cannot be hacked, which makes them useful for protection against digital bank frauds, security breaches and data thefts. They can also be used to tackle complicated tasks such as optimizing transportation problems and simulating the financial market.

Classical circuits consist of universal logic gates (such as NAND and NOR gates), each of which performs pre-defined operations on the input to produce an output.

“Analogously, there are universal quantum gates for making quantum circuits. In reality, the gates are not 100 percent efficient; there is always an error associated with the output of each gate. And that error cannot be removed; it simply keeps on adding for every gate used in the circuit,” says Pratik Nandy, Sinha’s PhD student and a co-author of the paper.

The most efficient circuit does not minimise the error in the output; rather it minimises the resources required for obtaining that same output. “So the question boils down to: given a net error tolerance, what is the minimum number of gates needed to build a quantum circuit?” says Nandy.

In 2006, a study led by Michael Nielsen, a former faculty member at the University of Queensland, showed that counting the number of gates to achieve maximum efficiency is equivalent to finding the path with the shortest distance between two points in some mathematical space with volume V. A separate 2016 study argued that this number should vary directly with V.

“We went back to Nielsen’s original work and it turns out that his gate counting does not give you a variation with V, rather it varies with V2,” says Sinha. He and his team generalised that study’s assumptions and introduced a few modifications to resolve the optimization problem. “Our calculations revealed that the minimum number of gates indeed varies directly with the volume,” he says.

Surprisingly, their results also appear to link the efficiency optimization problem with string theory, a famous idea that tries to combine gravity and quantum physics to explain how the universe works. Sinha and his team believe that this link can prove to be instrumental in helping scientists interpret theories that involve gravity. They also aim to develop methods that describe a collection of quantum circuits to calculate certain experimental quantities that cannot be theoretically simulated using existing methods.