A through-the-wall radar, built on a chip smaller than a grain of rice, has been developed by a team of researchers at the Indian Institute of Science (IISc), led by Gaurab Banerjee, Associate Professor at the Department of Electrical Communication Engineering.

Developed using Complementary Metal Oxide Semiconductor (CMOS) technology, this radar has a single transmitter, three receivers, and an advanced frequency synthesizer capable of generating complex radar signals, all packed together into a tiny chip. Its small size can enable mass production at a low cost. Such radars can have wide-ranging applications in the defence sector, as well as areas such as healthcare, transportation and agriculture.

“Only a handful of countries in the world today have the ability to put the entire electronics of a radar on a chip,” says Banerjee.

Radars work on the principle of bouncing a signal off an object and measuring the delay in the signal’s return. These signals are analyzed to identify the object — even reconstruct a crude image of it — or determine where it is or how fast it is moving. An extension of this technology is a through-the-wall radar (TWR), which works on the principle that radio waves can penetrate walls, when light cannot.

“TWR imaging has always been one of the most challenging radar design problems,” says Banerjee. For one, the signal can get significantly damped while passing through walls. To overcome this, radio waves consisting of a large number of frequencies need to be used, which can complicate the design. These radars also use a more complex signal, known as a chirp, which requires customized electronics such as a microwave transmitter, a receiver and a frequency synthesizer.

With their design, the IISc team has now managed to squeeze all of these electronic components into a single, tiny chip. They used new architectural and circuit design techniques to overcome challenges specific to radars – such as the design of a wide fractional bandwidth transceiver. “The same design techniques that have enabled smaller and cheaper smartphones can now be used to miniaturize the complex electronics of a radar system into a small chip,” says Banerjee.

Although the chip was originally developed for airport security-related applications, Banerjee’s group is also exploring applications in other areas such as healthcare.

A photomicrograph of the TWR radar-on-chip compared to a grain of rice (Photo Credit: ARSL, IISc).

For instance, it can be used to monitor the health of elderly people. There are more than 10 crore elderly people in India, with many living on their own. If they slip and fall, and it goes undetected, it can lead to severe long-term problems. Although cameras and wearables have been used to monitor their movements, there are concerns about privacy and inconvenience. TWR radar systems, therefore, offer a convenient alternative.

“It might be possible for a centrally-placed TWR system to scan the house, and construct a model of when a person is standing or sitting down. If there is a sudden change in gait due to a fall, it can trigger an alarm,” says Banerjee. “It could also monitor breathing and respiration rates and assess the severity of a fall.” 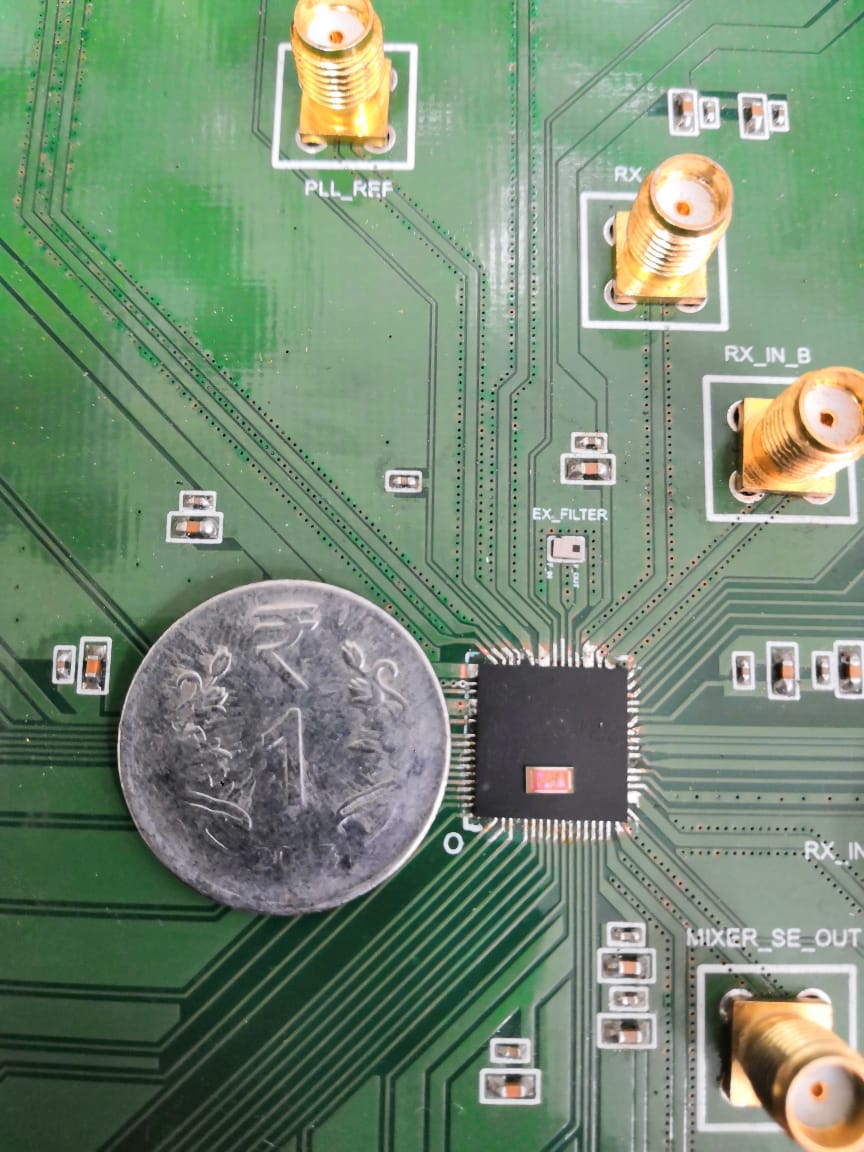 TWR radar package in its test board with the chip placed on top for comparison (Photo Credit: ARSL, IISc).

This research was funded by the IMPRINT programme of the Government of India, with additional financial contributions from the Ministry of Human Resource Development (MHRD) and the Defence Research and Development Organization (DRDO). Bharat Electronics Limited (BEL), a defence PSU, has been an active industrial partner in this IMPRINT project since its inception.