Indian paper wasps have their favourite places in their nests

A new study from the Indian Institute of Science (IISc) has shown that Indian paper wasps distribute themselves non-randomly in their nests, a strategy that may help them exchange food efficiently and avoid the spread of infections.

The study was carried out by PhD student Nitika Sharma and Raghavendra Gadagkar, DST Year of Science Chair Professor at the Centre for Ecological Sciences, IISc, and published in the Proceedings of the Royal Society B. 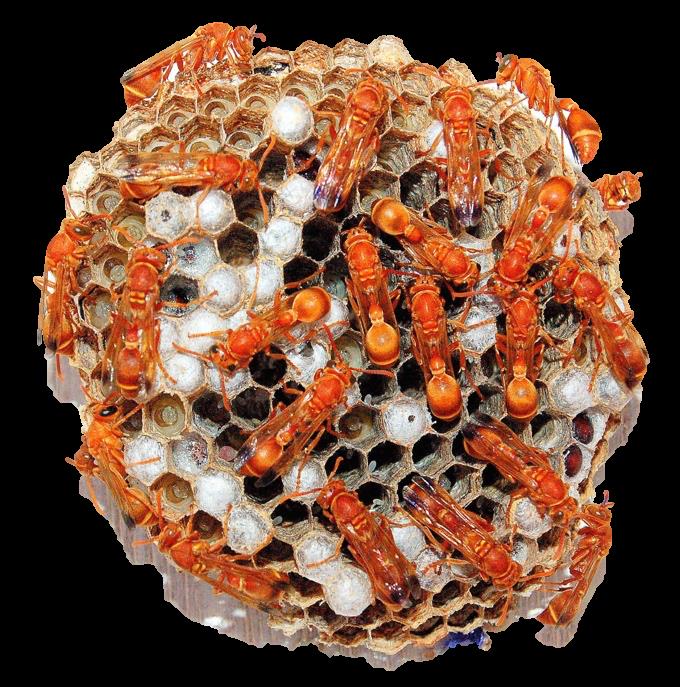 A typical nest of the Indian paper wasp Ropalidia marginata showing various brood stages in the cells and adults on the surface. Photo: Dr. Thresiamma Varghese.

All mobile animals have the option to decide where they can be at any given time. With freedom comes responsibility — they have to choose the best place to be in and find a way to get there, often against odds. If this is all too daunting, animals should simply be distributed randomly in space. But most animals are undaunted — non-random space use is wide-spread. Even when animals are restricted to a certain territory or home-range, they do not roam about this space randomly. Instead, they prefer specific locations for feeding, for resting, for mating, or for fighting.

Social insects such as ants, bees and wasps spend most of their time crowded at very high densities, inside relatively small nests, leaving very little scope, one might have thought, for non-random space use within the nest. Nature never ceases to surprise. Even in these crowded nests, ants and honey bees have been shown to use space non-randomly. This helps them to perform tasks efficiently, as the tasks themselves are non-randomly distributed. Nurses, for example, should be where the brood is located, guards where the danger is, and builders where repairs are needed. Core areas (green boundary) where a sample of four wasps, the queen (Q), the future or potential queen (PQ) and two workers (W1 and W2) spend 50 percent of their time. The dots denote the locations of the wasps during repeated sampling over a period of 3 days. The brown boundary denotes the boundary of the nest.

Sharma and Gadagkar have now pushed the envelope further. They studied the Indian paper wasp Ropalidia marginata which lives in small paper nests where tasks are distributed randomly — brood is everywhere, as is danger — and yet they found non-random space use. Using a mathematical technique generally used by ecologists to demarcate places frequently visited by large animals in the outdoors, they demarcated spaces on the nests where wasps spent over 50 percent of their time. For a majority of the wasps, this space was less than 50 percent of the area of the nest, suggesting real preference and not simply a chance occurrence.

But why should the wasps take the trouble of choosing their places in the nest so carefully? Sharma and Gadagkar systematically tested and ruled out most of the ideas that have been advanced by researchers studying ants and honey bees. They did not find any evidence that dominant wasps pushed subordinates to the periphery, that active wasps moved automatically to the periphery, that wasps engaged in feeding the larvae stayed close to the brood, or that wasps chose their locations so as to avoid their queens. Instead, Sharma and Gadagkar found support for two other ideas: non-random space use helps efficient food transfer among adults and helps avoid the spread of infection.

Ants and honey bees store food in their nests and the task of the nurses is to transfer the food from its storage location to the larvae. Paper wasps do not store food — they eat insects and spiders and have not invented refrigeration! Forager wasps bring morsels of food back to the nest from time to time. This is unloaded by one or more wasps at the nest which is then distributed to several other wasps that partake of some of it themselves, and offer the rest to the larvae, distributed all over the nest. Non-random space use allows wasps that exchange food with each other to be located close to each other, making food distribution more efficient. But such spreading of food all across the nest brings new problems, namely the spread of infection across the colony. Another function of non-random space use is to limit the spread of such infection. Queens, who are the most evolutionarily-valuable members of the colony, avoid being physically close to the foragers, who are most likely to carry infections.

Social life brings with it many advantages, but also many challenges. The Indian paper wasps seem to have found a formula to maximize the benefits of social life while minimizing its costs — non-random space use.