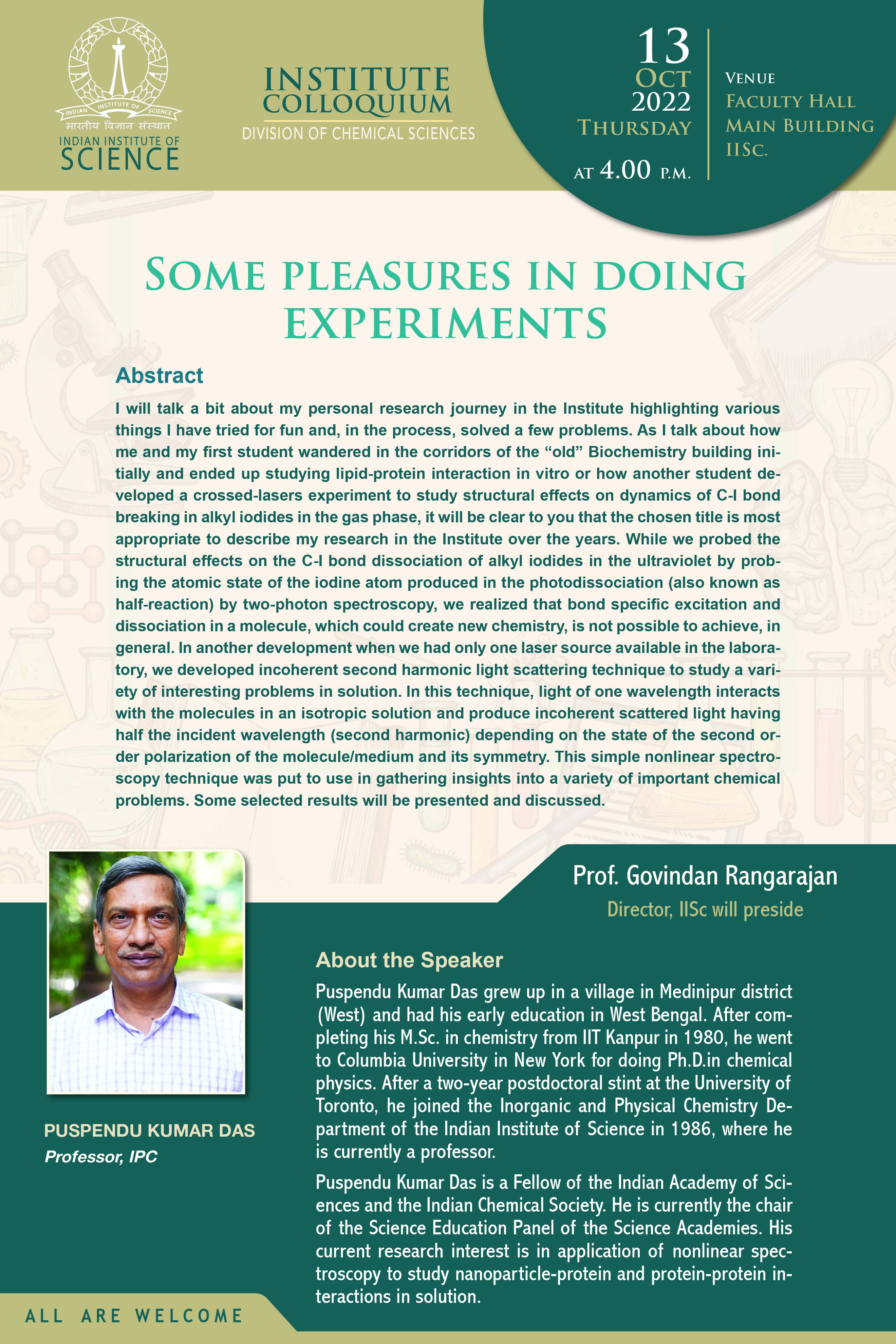 Title: Some pleasures in doing experiments

Abstract: I will talk a bit about my personal research journey in the Institute highlighting various things I have tried for fun and, in the process, solved a few problems. As I talk about how me and my first student wandered in the corridors of the “old” Biochemistry building initially and ended up studying lipid-protein interaction in vitroor how another student developed a crossed-lasers experiment to study structural effects on dynamics of C-I bond breaking in alkyl iodides in the gas phase, it will be clear to you that the chosen title is most appropriate to describe my research in the Institute over the years. While we probed the structural effects on the C-I bond dissociation of alkyl iodides in the ultraviolet by probing the atomic state of the iodine atom produced in the photodissociation (also known as half-reaction) by two-photon spectroscopy, we realized that bond specific excitation and dissociation in a molecule, which could create new chemistry, is not possible to achieve, in general. The result was contrary to what was aimed in a bichromophoric moleculelike chloroiodomethane but we got insights into the problem of polyatomic dissociation in the process. In another development when we had only one laser source available in the laboratory, we developed incoherent second harmonic light scattering technique to study a variety of interesting problems in solution. In this technique, light of one wavelength interacts with the molecules in an isotropic solution and produce incoherent scattered light having half the incident wavelength (second harmonic) depending on the state of the second order polarization of the molecule/medium and its symmetry. This simple nonlinear spectroscopy technique was put to use for measuring properties like dissociation constant of a weak acid, partition coefficient of an analyte in different phases, geometry of an intermolecular complex, stoichiometry of a supramolecular assembly, critical micelle concentration of a surfactant, etc. Lately, the same technique has been applied by us to measure thermodynamics of nanoparticle-protein and protein-protein interactions. Some of the selected results will be presented and discussed.

About the Speaker: Puspendu Kumar Das grew up in a village in Medinipur district (West) and had his early education in West Bengal. After completing his M.Sc. in chemistry from IIT Kanpur in 1980, he went to Columbia University in New York for doing Ph.D.in chemical physics. After a two-year postdoctoral stint at the University of Toronto, he joined the Inorganic and Physical Chemistry Department of the Indian Institute of Science in 1986, where he is currently a professor.

Puspendu Kumar Das is a Fellow of the Indian Academy of Sciences and the Indian Chemical Society. He is currently the chair of the Science Education Panel of the Science Academies. His current research interest is in application of nonlinear spectroscopy to study nanoparticle-protein and protein-protein interactions in solution.