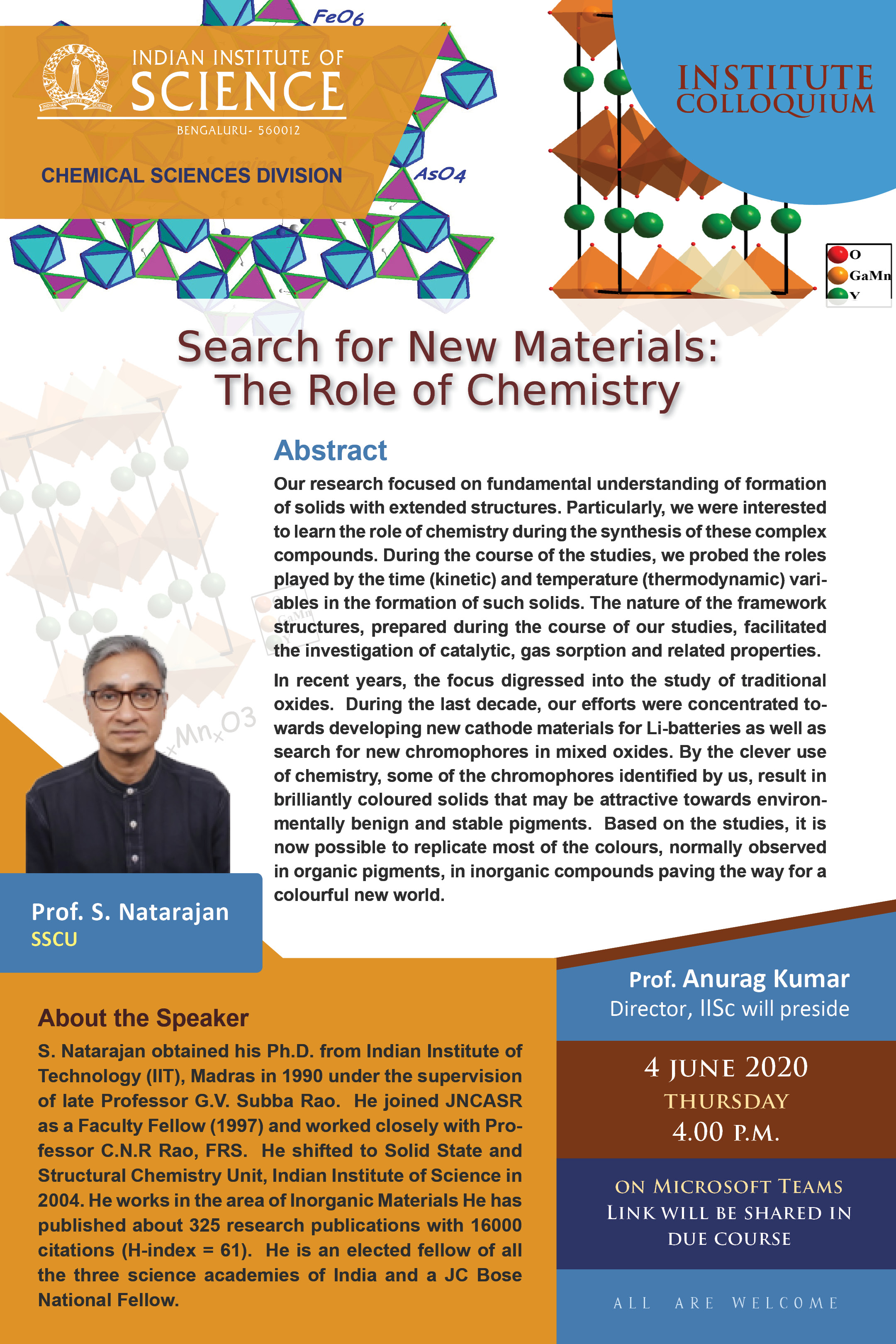 Title : Search for New Materials: The Role of Chemistry

Our research focused on fundamental understanding of formation of solids with extended structures. Particularly, we were interested to learn the role of chemistry during the synthesis of these complex compounds. During the course of the studies, we probed the roles played by the time (kinetic) and temperature (thermodynamic) variables in the formation of such solids. The nature of the framework structures, prepared during the course of our studies, facilitated the investigation of catalytic, gas sorption and related properties.

In recent years, the focus digressed into the study of traditional oxides. During the last decade, our efforts were concentrated towards developing new cathode materials for Li-batteries as well as search for new chromophores in mixed oxides. By the clever use of chemistry, some of the chromophores identified by us, result in brilliantly coloured solids that may be attractive towards environmentally benign and stable pigments. Based on the studies, it is now possible to replicate most of the colours, normally observed in organic pigments, in inorganic compounds paving the way for a colourful new world.

S. Natarajan finished his under graduate and post-graduate education from Madurai-Kamaraj University, Madurai, Tamilnadu. He obtained his Ph.D. from Indian Institute of Technology (IIT), Madras in 1990 under the supervision of late Professor G.V. Subba Rao. He carried out post-doctoral research at the Royal Institution of Great Britain, London, UK with Professor Sir John M. Thomas, FRS and later at the Materials Research Laboratory, University of California, Santa Barbara with Professor Sir Anthony K. Cheetham, FRS. He returned to India in 1997 and joined JNCASR as a Faculty Fellow and worked closely with Professor C.N.R Rao, FRS. He shifted to Solid State and Structural Chemistry Unit, Indian Institute of Science in 2004 as Associate Professor. He became a Professor in 2008.

He works in the area of Inorganic Materials Chemistry – Solid state chemistry, Framework solids including inorganic-organic hybrids. Heterogeneous catalysis, photocatalysis, luminescent and magnetic materials, Li-ion conduction, Proton conduction, ceramic pigments and electrocatalysis. He has published about 325 research publications with 16000 citations (H-index = 61). He is an elected fellow of all the three science academies of India and a JC Bose National Fellow. He is presently serving as an editorial advisory board member of International Journals (Chemistry – An Asian Journal, Chemistry Select, Zeitschrift für Anorganische und Allgemeine Chemie (ZAAC)) and also as the chief editor of J. of Chemical Sciences (Indian Academy of Science, co-published with Springer) and Associate editor of Current Science.