Miniproteins that can launch two-pronged attacks on viral proteins

The rapid emergence of new strains of the SARS-CoV-2 virus has diminished the protection offered by COVID-19 vaccines. A new approach developed by researchers at the Indian Institute of Science (IISc) now provides an alternative mechanism to render viruses like SARS-CoV-2 inactive.

In a study published in Nature Chemical Biology, the researchers report the design of a new class of artificial peptides or miniproteins that can not only block virus entry into our cells but also clump virions (virus particles) together, reducing their ability to infect.

A protein-protein interaction is often like that of a lock and a key. This interaction can be hampered by a lab-made miniprotein that mimics, competes with, and prevents the ‘key’ from binding to the ‘lock’, or vice versa.

In the new study, the team has exploited this approach to design miniproteins that can bind to, and block the spike protein on the surface of the SARS-CoV-2 virus. This binding was further characterised extensively by cryo-electron microscopy (cryo-EM) and other biophysical methods.

These miniproteins are helical, hairpin-shaped peptides, each capable of pairing up with another of its kind, forming what is known as a dimer. Each dimeric ‘bundle’ presents two ‘faces’ to interact with two target molecules. The researchers hypothesised that the two faces would bind to two separate target proteins locking all four in a complex and blocking the targets’ action. “But we needed proof of principle,” says Jayanta Chatterjee, Associate Professor in the Molecular Biophysics Unit (MBU), IISc, and the lead author of the study. The team decided to test their hypothesis by using one of the miniproteins called SIH-5 to target the interaction between the Spike (S) protein of SARS-CoV-2 and ACE2 protein in human cells.

The S protein is a trimer – a complex of three identical polypeptides. Each polypeptide contains a Receptor Binding Domain (RBD) that binds to the ACE2 receptor on the host cell surface. This interaction facilitates viral entry into the cell.

The SIH-5 miniprotein was designed to block the binding of the RBD to human ACE2. When a SIH-5 dimer encountered an S protein, one of its faces bound tightly to one of the three RBDs on the S protein trimer, and the other face bound to an RBD from a different S protein. This ‘cross-linking’ allowed the miniprotein to block both S proteins at the same time. “Several monomers can block their targets,” says Chatterjee. “[But] cross-linking of S proteins blocks their action many times more effectively. This is called the avidity effect.” 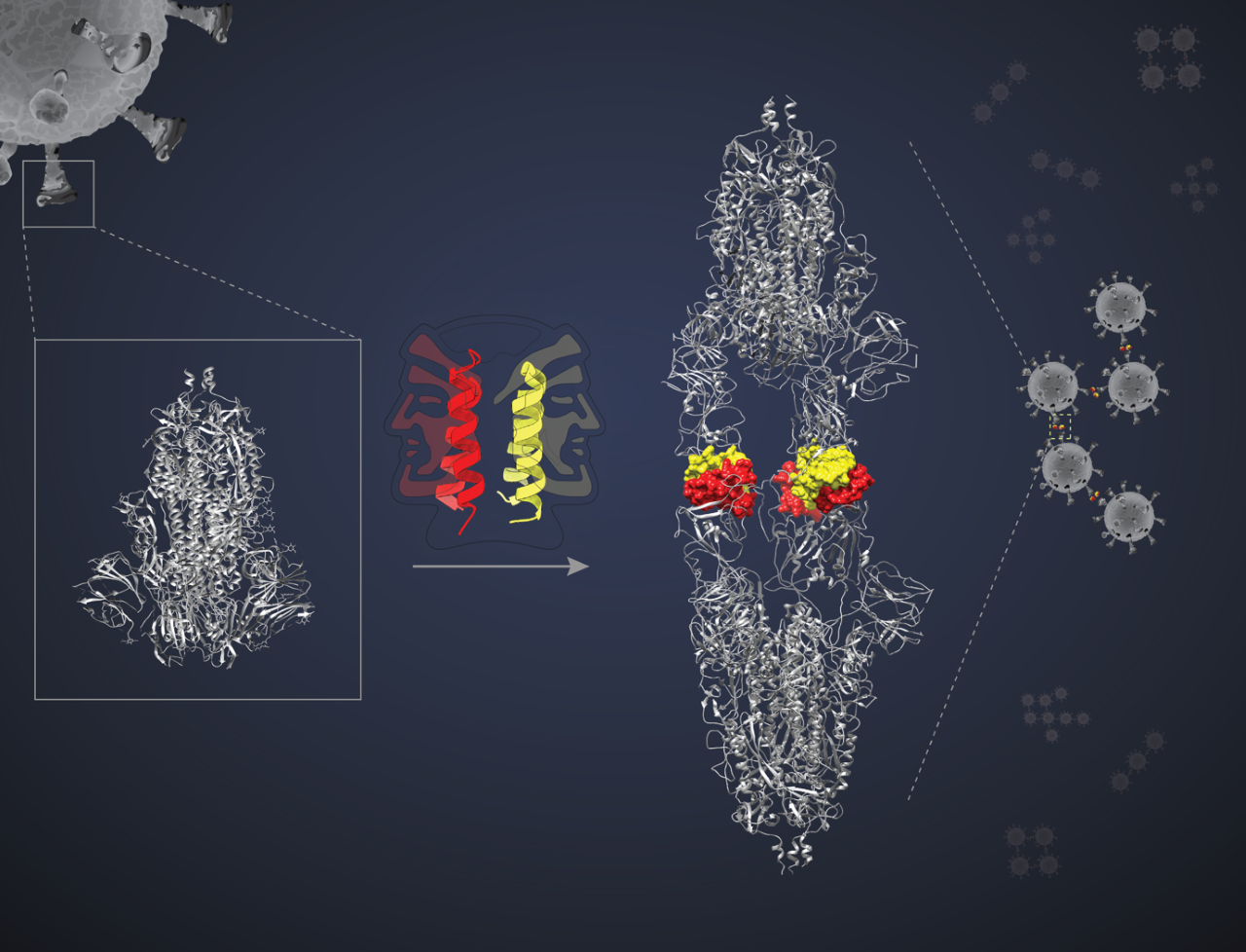 Under cryo-EM, the S proteins targeted by SIH-5 appeared to be attached head-to-head. “We expected to see a complex of one spike trimer with SIH-5 peptides. But I saw a structure that was much more elongated,” says Somnath Dutta, Assistant Professor at MBU and one of the corresponding authors. Dutta and the others realised that the spike proteins were being forced to form dimers and clumped into complexes with the miniprotein. This type of clumping can simultaneously inactivate multiple spike proteins of the same virus and even multiple virus particles. “I have worked with antibodies raised against the spike protein before and observed them under a cryo-EM. But they never created dimers of the spikes,” says Dutta.

The miniprotein was also found to be thermostable – it can be stored for months at room temperature without deteriorating.

The next step was to ask if SIH-5 would be useful for preventing COVID-19 infection.

To answer this, the team first tested the miniprotein for toxicity in mammalian cells in the lab and found it to be safe. Next, in experiments carried out in the lab of Raghavan Varadarajan, Professor at MBU, hamsters were dosed with the miniprotein, followed by exposure to SARS-CoV-2. These animals showed no weight loss and had greatly decreased viral load as well as much less cell damage in the lungs, compared to hamsters exposed only to the virus.

The researchers believe that with minor modifications and peptide engineering, this lab-made miniprotein could inhibit other protein-protein interactions as well.