Link for the event: http://mbu.iisc.ac.in/GNR.htm/index.htm

Prof. G N Ramachandran was one of the most intellectually gifted scientists of independent India. Born on the 8th of October 1922, he received his primary and secondary education in erstwhile princely state of Cochin. He then completed an Honors degree in Physics from St. Joseph’s College, Tiruchirapalli, securing the first rank among all physics honors students in the then Madras Presidency. In 1942, G N Ramachandran enrolled for a Master’s degree in Physics at the Indian Institute of Science under the tutelage of Prof. C. V. Raman. His Master’s thesis titled “Optics of Heterogenous media” was received with great accolades. He continued his research work at the Institute for a doctoral degree, in his case a D. Sc. (Doctor of Science), as an independent researcher. G N Ramachandran followed this with a second doctoral degree, titled “Determination of Elastic Constants of Crystals from Measurements of Diffuse X-ray Reflections”, from Cambridge University in England. At the early age of 27, G N Ramachandran was a double doctorate, specializing in the physics of X-ray diffraction.

After a brief stint as an Assistant Professor in the Department of Physics, Indian Institute of Science, Prof. Ramachandran moved to the University of Madras as Professor and Head of the Department of Physics in October 1952. It was here that he and his group of X-ray crystallographers made their lasting contributions in Biophysics. Prof. Ramachandran along with his peerless postdoctoral fellow,
Dr. Gopinath Kartha determined the three-dimensional structure of the structural protein Collagen, which is arguably the first “structure” of a protein ever to be determined. This was followed by several studies on the structure and conformation of proteins and peptides which culminated in the formulation of the eponymous “Ramachandran Plot”, that is now known to every student and practitioner of biochemistry and protein chemistry.

In addition to the studies on biomolecules, several important contributions to the physics of X-ray crystallography and the application of the method to the determination of structures of biomolecules and inorganic complexes also followed. In 1971, Prof. Ramachandran returned to the Indian Institute of Science as the founding head of the Molecular Biophysics Unit. He nurtured strong groups of faculty members in experimental X-ray crystallography, protein chemistry and biomolecular conformation using computational methods. Since then, the Molecular Biophysics Unit has grown to be one of the important centers for structural biology in India. Towards the latter stages of his career, Prof. Ramachandran pursued his love for “Mathematical philosophy”. He continued to work independently on various problems in logic and philosophy.

The breadth and depth of Prof. G. N. Ramachandran’s scientific contributions are awe-inspiring. They stem from a very strong fundamental and a deep understanding of mathematics as applied to physical phenomena. He is the recipient of several scientific awards, both national and international, such as the Shanti Swarup Bhatnagar Prize, the Meghnath Saha Medal of the Asiatic Society, the Srinivasa Ramanujam Medal of the Indian National Science Academy, the Sir C. V. Raman Medal of the Indian National Science Academy and the Fogarty International Medal of the National Institutes of Health, USA to name a few. He was elected as Fellow of the Royal Society, United Kingdom.

As a mark of respect to our founding department head and to honour and remember his contributions to science, the Molecular Biophysics Unit is celebrating the birth centenary of Prof. G. N. Ramachandran. A symposium to mark this event will be held on the 8th of April 2022. The experts who will deliver lectures on this occasion are:

Prof. Manju Bansal, Indian Institute of Science, Bangalore – Think of science as a game or puzzle: my small efforts to follow GNR’s advice.

Prof. Tom Blundell, University of Cambridge, United Kingdom – The impact of GNR on our Endeavours in Structural Biology: Much More than just a Plot. 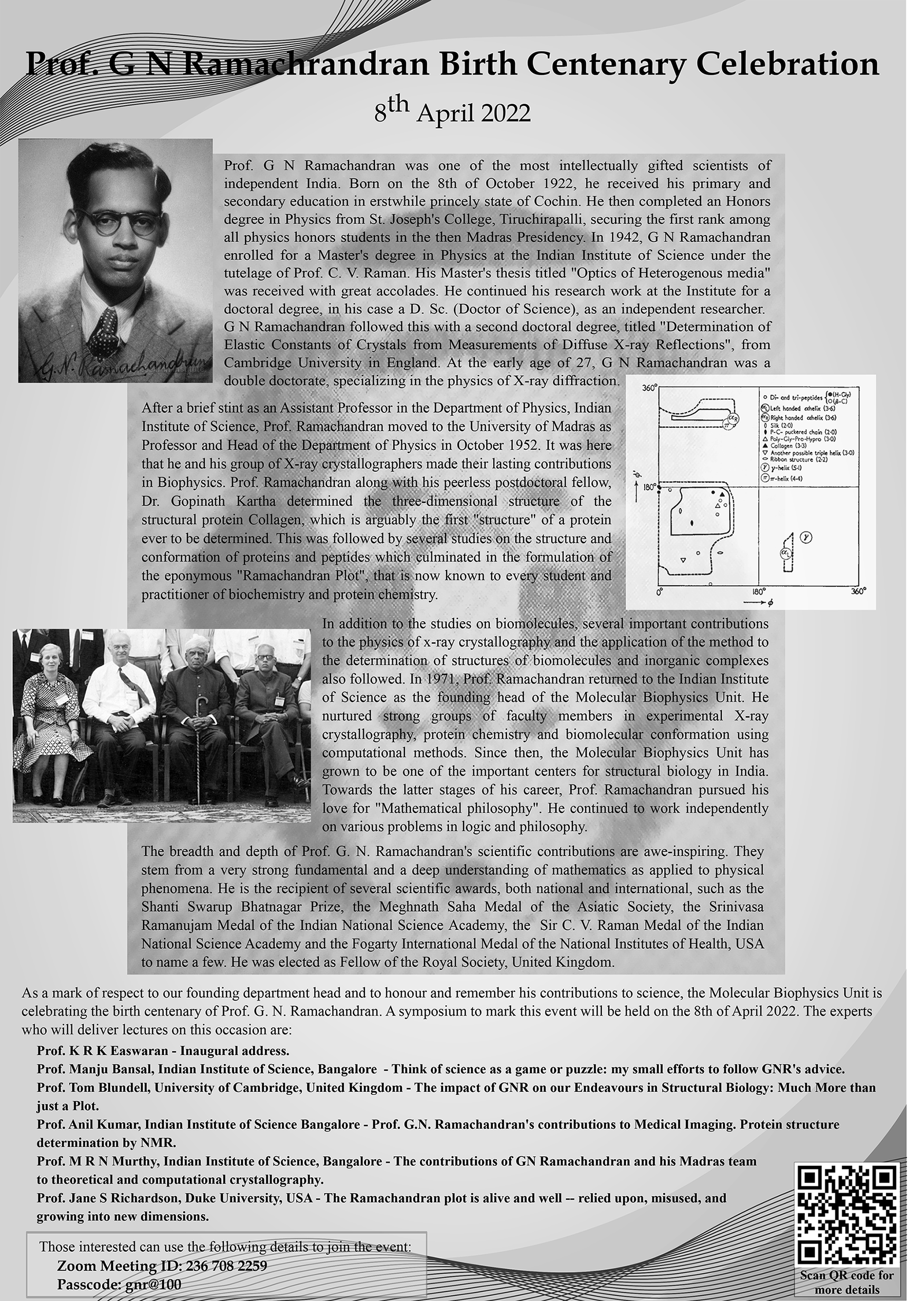