Title : The Expanding Frontiers of Space Research:  Inspirations, Innovations and Challenges in Mission and Aerodynamics Design

Abstract :
The quest for unraveling the mysteries of the universe is as old as human history. It is only relatively recently that we are able to address the complexity and challenges of physically traversing beyond our own planet.  The space era began some decades ago; and the fast-expanding scientific and technical developments give us the exciting opportunity to explore, studyand understand the solar system and beyond; and also to get a due perspective of the role of humanity in the almost infinite vastness of space. This talk will touch upon the essentials of space system engineering that brings together multiple disciplines of engineering and sciences. Development of satellites and launch vehicles calls for the interplay of aerodynamics, flight mechanics, structural and thermal sciences, propulsion systems, mechanisms, navigation, guidance, control, tracking telemetry and communications; and more. The design should also address the complex interactions and varying environmental conditions between take-off and the final destination. The talk will also present a glimpse of the space odyssey in the coming
two decades where human habitat missions to Mars and other planets are envisaged.

About the Speaker : Dr. Adimurthy obtained his Ph.D. degree from IIT Kanpur in 1973 and joined ISRO the same year. He has made significant contributions in the areas of aerodynamics, flight dynamics, trajectory optimization, space dynamics, space debris studies, lunar and interplanetary mission design, and multidisciplinary design optimization. He has served as Prof. Satish Dhawan Professor and Senior Advisor (Interplanetary Missions) at ISRO. He is a Fellow of the Indian National Academy of Engineering, Academician of the International Academy of Astronautics, Senior Fellow of the Alexander von Humboldt Foundation, Germany, a Fellow of the Systems Society of India, and the Astronautical Society of India, the National Aeronautical Prize (2005), Padma Shri (2012) and Prof Jai Krishna Memorial Award of the Indian National Academy of Engineering (2016). 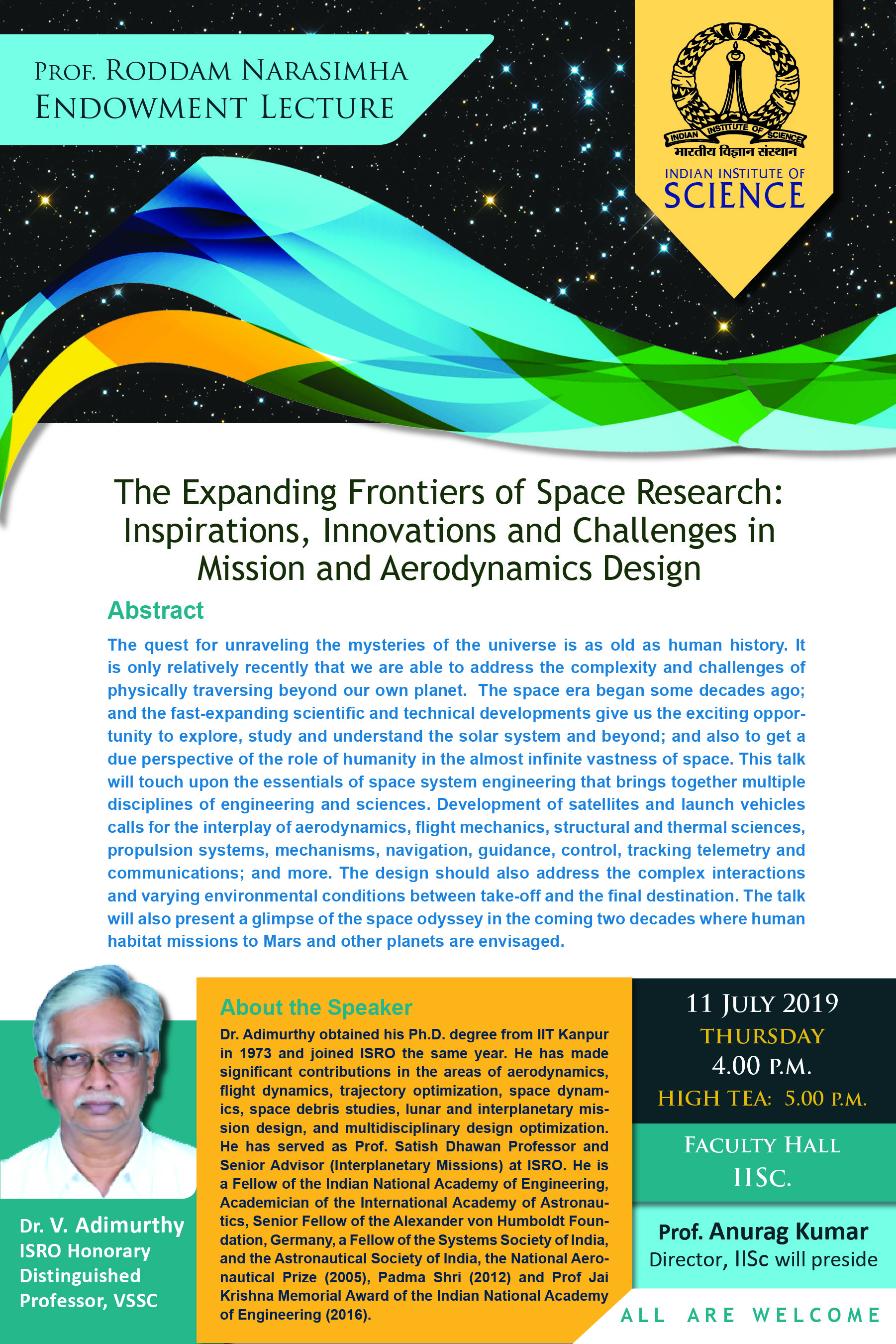