Astronomers from McGill University in Canada and the Indian Institute of Science (IISc) in Bengaluru have used data from the Giant Metrewave Radio Telescope (GMRT) in Pune to detect a radio signal originating from atomic hydrogen in an extremely distant galaxy. The astronomical distance over which such a signal has been picked up is the largest so far by a large margin. This is also the first confirmed detection of strong lensing of 21 cm emission from a galaxy. The findings have been published in the Monthly Notices of the Royal Astronomical Society.

Atomic hydrogen is the basic fuel required for star formation in a galaxy. When hot ionised gas from the surrounding medium of a galaxy falls onto the galaxy, the gas cools and forms atomic hydrogen, which then becomes molecular hydrogen, and eventually leads to the formation of stars. Therefore, understanding the evolution of galaxies over cosmic time requires tracing the evolution of neutral gas at different cosmological epochs. 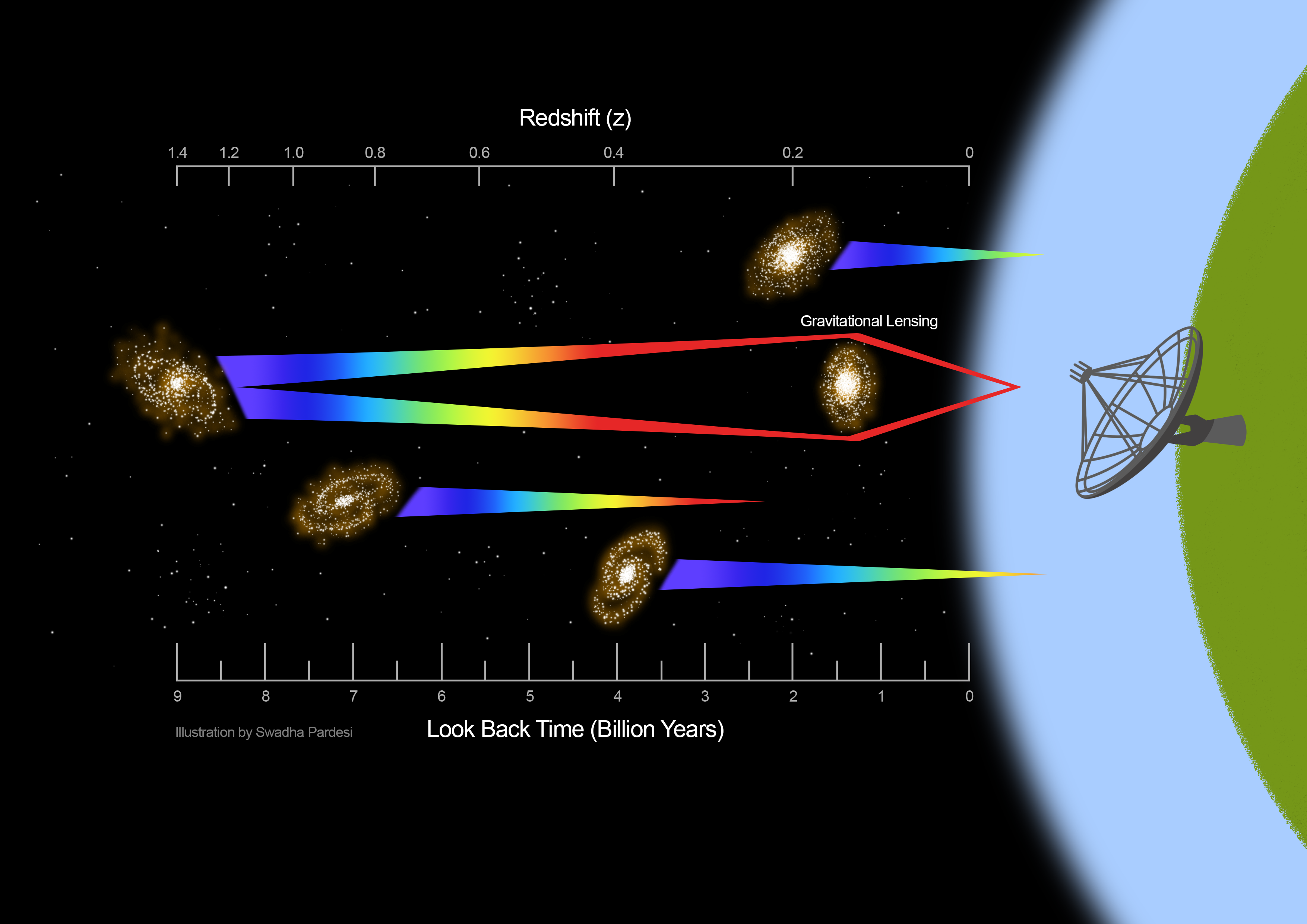 Atomic hydrogen emits radio waves of 21 cm wavelength, which can be detected using low frequency radio telescopes like the GMRT. Thus, 21 cm emission is a direct tracer of the atomic gas content in both nearby and distant galaxies. However, this radio signal is extremely weak and it is nearly impossible to detect the emission from a distant galaxy using current telescopes due to their limited sensitivity. Until now, the most distant galaxy detected using 21 cm emission was at redshift z=0.376, which corresponds to a look-back time – the time elapsed between detecting the signal and its original emission – of 4.1 billion years (Redshift represents the change in wavelength of the signal depending on the object’s location and movement; a greater value of z indicates a farther object).

Using GMRT data, Arnab Chakraborty, postdoctoral researcher at the Department of Physics and Trottier Space Institute of McGill University, and Nirupam Roy, Associate Professor, Department of Physics, IISc have detected a radio signal from atomic hydrogen in a distant galaxy at redshift z=1.29.

“Due to the immense distance to the galaxy, the 21 cm emission line had redshifted to 48 cm by the time the signal travelled from the source to the telescope,” says Chakraborty. The signal detected by the team was emitted from this galaxy when the universe was only 4.9 billion years old; in other words, the look-back time for this source is 8.8 billion years.

This detection was made possible by a phenomenon called gravitational lensing, in which the light emitted by the source is bent due to the presence of another massive body, such as an early type elliptical galaxy, between the target galaxy and the observer, effectively resulting in the “magnification” of the signal. “In this specific case, the magnification of the signal was about a factor of 30, allowing us to see through the high redshift universe,” explains Roy.

The team also observed that the atomic hydrogen mass of this particular galaxy is almost twice as high as its stellar mass. These results demonstrate the feasibility of observing atomic gas from galaxies at cosmological distances in similar lensed systems with a modest amount of observing time. It also opens up exciting new possibilities for probing the cosmic evolution of neutral gas with existing and upcoming low-frequency radio telescopes in the near future.

Yashwant Gupta, Center Director at NCRA, said, “Detecting neutral hydrogen in emission from the distant Universe is extremely challenging and has been one of the key science goals of GMRT. We are happy with this new path breaking result with the GMRT, and hope that the same can be confirmed and improved upon in the future.”

The Giant Metrewave Radio Telescope was built and is operated by NCRA-TIFR. The research was funded by McGill and IISc.