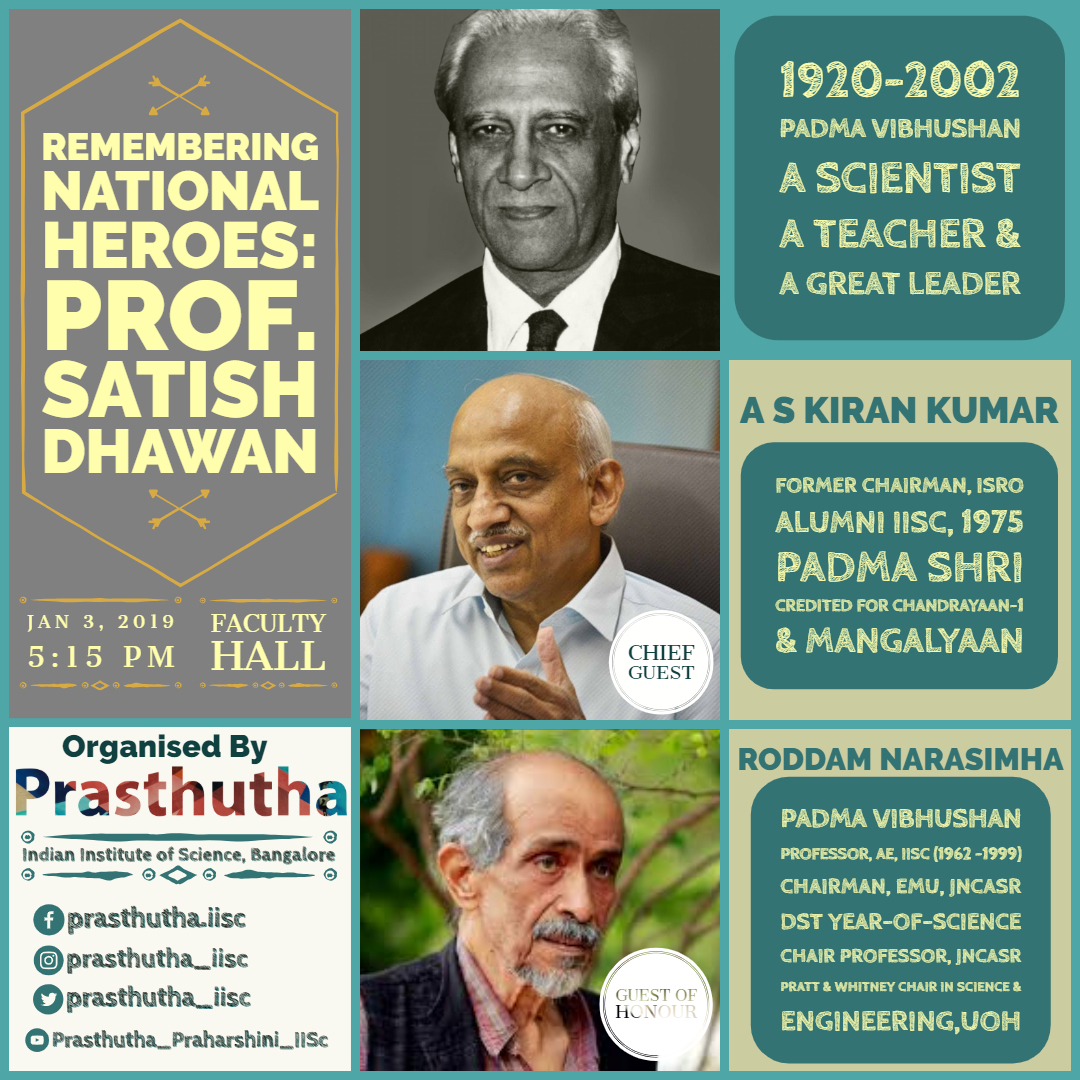 Invites you to pay tributes to Prof. Satish Dhawan, one of the pioneers of Indian Space Research and former Director, IISc (1962-1981).

Prof. Roddam Narsimha is a renowned Indian aerospace scientist and fluid dynamicist. He was formerly a Professor of Aerospace Engineering at the Indian Institute of Science, Director of National Aerospace Laboratories (NAL) and the Chairman of Engineering Mechanics Unit at JNCASR, Bangalore. He is presently an Honorary Professor at JNCASR and concurrently holds the Pratt & Whitney Chair in Science and Engineering at the University of Hyderabad. He has been awarded the Padma Vibhushan, India’s second highest civilian award, in 2013.

Mr Kiran Kumar is a highly accomplished space scientist and engineer with a distinguished career spanning over four decades in the satellite payload and applications domains. He was the Chairman of ISRO from 2015-2018 and is currently serving as the member of Space Commission. He is an alumnus of National College, the esteemed educational institution of Bangalore. He has received his M.Tech Degree in Physical Engineering from the Indian Institute of Science, Bangalore in 1975. He has played a crucial role in Chandrayaan-1 mission right from the conceptualization stage and has made exemplary contributions to the success of Mars Orbiter Mission. In recognition of his contributions, he was conferred Padma Shri award by the President of India in 2014.

Prof. Jyotsna Dhawan, daughter of Prof. Satish Dhawan obtained her Ph.D. in cell biology and biochemistry from Boston University in 1991 and pursued postdoctoral work on adult stem cells and gene therapy at Stanford University. She joined the Centre for Cellular and Molecular Biology (CCMB) in Hyderabad, studying the biology of muscle stem cells and muscle repair. From 2009-2014, she helped to establish the Institute for Stem Cell Biology and Regenerative Medicine (InStem) in Bangalore. Currently, She is Chief Scientist at CCMB and Professor, Academy of Scientific and Innovative Research, retaining links with InStem as an adjunct professor and a member of the advisory board. She also serves as the Scientist In Charge of CCMB’s iHub, a next-generation innovation space with an incubation center for startups, skilling and training programs and genetic diagnostics services, in addition to translational research programs.