Born in Cherpu, Kerala, India on 16 October 1941, Vijayan obtained his PhD in 1967 from IISc. He participated in the structure solution of insulin in Dorothy Hodgkin’s laboratory in Oxford, as a postdoctoral fellow during 1968-71. He spent one more year in the same laboratory as a Visiting Fellow in 1976-77. He started his independent career at IISc in 1971. After working in different capacities, he formally retired as the Associate Director of IISc in 2004. Since then, he has occupied different important positions, all tenable at IISc, including two prestigious chairs: the HomiBhabha Professorship of the Department of Atomic Energy (DAE) and the Albert Einstein Professorship of the Indian National Science Academy (INSA). 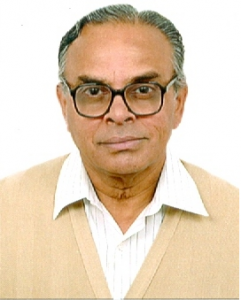 Vijayan has worked in the Councils of all the three science academies. He was the President of INSA for three years, starting from January 2008. He has been involved with the science departments of the Government of India at the highest levels and also helped with policy formulations. He has helped many scientific institutions in the country as Chairman/Member of governing or advisory bodies.

Vijayan and colleagues have dealt with four of the five major structural classes of plant lectins. In fact, one of them was discovered by them. In addition to yielding useful information specific to each of the lectins studied, the programme has provided significant new results pertaining to the quaternary association of proteins and strategies for generating ligand specificity. Vijayan’s group is among the world leaders in lectin research. Most recently, Vijayan and colleagues were involved in extending the work to lectins from mycobacteria. They have also identified for the first time lectins in archea, thus demonstrating the occurrence of lectins in all three domains of life.

In pursuit of a national programme on the structural biology of microbial pathogens which he orchestrated, Vijayan has been leading structural and related studies particularly of mycobacterial proteins involved in preserving genomic integrity. Among other things, these studies have opened up avenues for structure-based inhibitor design, with the eventual objective of drug development.

In another programme, Vijayan explored protein hydration and its consequences using a novel approach involving water-mediated transformations. These investigations have provided insights into the relationship among hydration, molecular plasticity and protein action.

When Vijayan returned to IISc in 1971 after participating in the structure investigation of insulin in the laboratory of Prof Dorothy Hodgkin in Oxford, he was the first trained macromolecular crystallographer to come back to India. His career objective was then primarily initiation and development of biological macromolecular crystallography in the country. That necessarily involved mentoring a group of young people and fostering scientific creativity in them.

After a great deal of preliminary efforts, the stage was set by the early 1980s to launch activities in the area. By then, Vijayan’s laboratory in Bengaluru was recognised by national agencies as the nucleus for the development of the area in the country. The mandate of the laboratory then was the establishment of a vibrant centre in the area at Bengaluru, and also leading the efforts in initiating and developing macromolecular crystallography efforts in different parts of the country. The emphasis of Vijayan when carrying out this mandate was to mentor a large number of graduate students and post-doctoral fellows in his laboratory. As subsequent events proved, this task was successfully accomplished.

Much of macromolecular crystallography in India radiated from Bengaluru. Work in this area in the country is now in progress in nearly 40 institutions and involves approximately 80 groups, a majority of which is led by scientists trained in Vijayan’s laboratory and their academic descendants. Those trained in other schools, including distinguished ones abroad, also joined the community, giving it added vibrancy. The macromolecular crystallography community in India now is several hundred strong, and is reasonably coherent with multi-institutional programmes and common facilities. The role of Vijayan in mentoring the community as a whole is very well recognised. The development of macromolecular crystallography in India provides a rare example of an entire scientific community evolving substantially under the mentorship of one individual. The mentoring involved educational programmes in the early stages, providing encouragement and advice to individual scientists, helping in establishing local and shared facilities, and leadership in the evolution of common research programmes. Central to all these efforts was the role played by the brilliant scientists mentored in Vijayan’s laboratory in Bengaluru.

In addition to providing encouragement and scientific advice to most group leaders, Vijayan interceded with granting agencies to ensure that they are provided with adequate facilities. He led the efforts to ensure access of Indian scientists to the synchrotron facilities at Grenoble and Elettra, through appropriate long-term institutional mechanisms. He was also involved with the development of the Indian synchrotron facility at Indore and in ensuring rapport between the service providers and the crystallographic community.Dozens of scientists mentored by Vijayan are leaders of science in India and abroad.

He will be greatly missed by the Institute community.