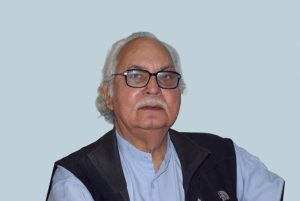 Prof Rajinder Kumar, Padma Bhushan awardee and a retired faculty member of the Department of Chemical Engineering at IISc, passed away on Monday, 7 February 2022, after a brief illness. He was 87 and is survived by his wife, son, daughter, and their families.

Although Prof Kumar formally retired from IISc in 1995 and from an honorary professorship at IISc in 2001, he continued to serve the department and many committees of the Government of India, the Council of Scientific and Industrial Research (CSIR), and other organisations in critical roles till date. He also continued to actively interact with departmental colleagues till January 2022, until the onset of the third wave of COVID-19.

Prof Kumar obtained his Bachelor of Science and Master of Science degrees from Panjab University. In 1956, he joined the Department of Chemical Engineering at IISc on a fellowship awarded by the Government of Punjab, to pursue a PhD under the supervision of Prof E Weingaertner and Dr RL Datta. Subsequently, Prof Kumar joined the department staff as a Junior Research Assistant, in the year 1958. He earned his PhD degree in 1965 by submitting his thesis to Panjab University. Earlier, Prof Kumar was appointed as a lecturer in the department in the year 1963. He was promoted to the post of Assistant Professor in 1967 and Professor in 1970. Prof Kumar served IISc in various administrative roles, including as the Chair of the Department of Chemical Engineering from 1976-79, the Chair of the Division of Mechanical Sciences from 1980-83, and the Dean of Engineering from 1990-92.

Prof Kumar’s research was in the area of multiphase phenomena. He was a recipient of several awards, including the Shanti Swarup Bhatnagar Prize (1976), the Herdilia Award of the Indian Institute of Chemical Engineers (1985), the VASVIK Award (1986), the Alumni Award for Excellence in Research in Engineering from IISc (1991), the FICCI Award (1994), and the Lifetime Achievement Award of the IIChE (2008). He was also a fellow of the Indian National Academy of Engineering, the Indian Academy of Sciences, and the Indian National Science Academy. In recognition of Prof Kumar’s significant contributions and achievements, he was conferred with the Padma Bhushan by the Government of India in 2003.

Prof Kumar, or Kumar Saheb as he was fondly addressed, was dear to all his colleagues, as well as generations of students. To commemorate his memory, the Department of Chemical Engineering has created a website at https://chemeng.iisc.ac.in/profrkumar/, where Prof Kumar’s colleagues and former students can share their thoughts and anecdotes, as well as browse through a photo album.

More information about Prof Kumar can be found at: