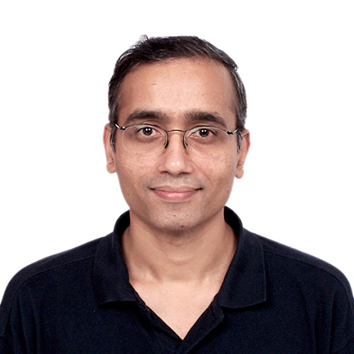 Prof Vasant Natarajan (or Vasant, as he very definitively preferred to be called by all and sundry), can be considered the pioneer of the field of laser cooling and trapping of neutral atoms in India, with his ‘Laser lab’ at IISc having – for the first time in this country – produced a cloud of trapped laser-cooled Rubidium atoms in 2001. His laboratory also set the path for high precision frequency metrology and quantum optics experiments employing precision atomic spectroscopy – another field hitherto not very well explored in India.

The most special thing about his career as a physics experimentalist was his staunch belief in setting up things absolutely from scratch, and developing entirely in-house infrastructure and expertise for almost every component required in the complex set of atomic physics experiments his lab performed. Thus, his laboratory possessed genuine expertise in developing their own semiconductor laser-based frequency tunable light sources, precision electronics, and ultra-high vacuum systems with hardware sourced from pan-Indian suppliers. In addition, his laboratory also developed an optical tweezers system; his collaborative work with biologists on malaria parasite-affected red blood cells was internationally acclaimed. He was also extremely interested in translating the technology his lab developed towards commercially viable devices, and launched a technology start-up on an indigenously designed solar power generator almost ten years back. In the context of the significant push towards technology translation lately, Vasant’s deep involvement in such matters also reflect on his natural tendency to think ahead of his time, as is also apparent from his persistent investment in ‘Make in India’ right from the time he joined IISc as a faculty member in the Department of Physics.

Vasant always had a stellar academic record, starting with a near perfect score in his BTech degree in Electronic Engineering from IIT Madras, and then moving on to Rensselaer Polytechnic Institute (RPI) in the US, where he obtained his MS in the same discipline. After this – quite remarkably – he changed track entirely and switched to physics, that too, experimental atomic physics, a subject that was going through a veritable upheaval with the first demonstration of spatially confined laser cooled atoms in 1986. This was an achievement that eventually led to facilitating humanity’s quest towards reaching absolute zero in temperature with the demonstration of the Bose-Einstein condensation of neutral atoms in 1995. Vasant proceeded to join the laboratory of Prof David Pritchard of MIT – a scientist directly involved in one of the first demonstrations of a magneto-optic trap for trapping laser cooled sodium atoms in 1987 – as a PhD student. Vasant obtained his PhD in 1993, after which he joined another illustrious laboratory working in the same research direction – the AT&T Bell Labs – where Prof Steven Chu, the winner of the Nobel Prize in 1997, had performed his Nobel-winning work in laser cooling and trapping. After two years at Bell Labs, Vasant joined IISc as an Assistant Professor in the Department of Physics in 1996, where he remained ever since.

He published more than a hundred papers on both experimental and theoretical atomic physics in his scientific career – with more than 85% of them from IISc. He also wrote three books; one each on atomic and general physics, while the third was for non-physics science and arts students. The latter reflected his increasing interest in science communication, and rationalism in general. In fact, during the later stages of his life, he proceeded to write several engrossing articles dispelling non-science and advocating scientific temper in Indian popular science journals such as Resonance, Research Matters, and so on. He was also part of the policy-making for DST’s flagship programme aimed at identifying and nurturing India’s young scientific talent right from the school level – the Kishore Vigyan Protsayan Yojna (KVPY) – when it was launched in 1999. His laboratory hosted KVPY fellows for their summer projects continuously, and introduced many a curious and intelligent young mind to the beauty and wonder of precision atomic spectroscopy and laser cooling. Vasant’s work was recognised by several awards and honours which included the Swarnajayanti Fellowship, Homi Bhabha Fellowship, and the Philips Foundation Fellowship.

Vasant Natarajan will be remembered not only for his seminal contributions to experimental precision atomic spectroscopy in India, but also as a deeply committed, iconoclastic, and ever-creative scientist, who firmly believed in the methods of science, and their applicability to almost all walks of life. His virtual obsession with, and thereby constant evocation to his students to be ‘good with your hands’ ensured that his progeny also believed in the same, and led to the creation of a generation of experimental physicists who have subsequently set up successful laboratories in India, or built successful careers abroad.

Finally, though his body failed him near the end of his days, his mind remained razor-sharp, and he remained creative even when he was almost entirely bed-ridden. While fate was ultimately unkind to him in cutting short his life so untimely, posterity shall always cherish his work, and he will live on in the minds of those that knew him – many of whom lost a bit of themselves with his sad demise.