Team iGEM-IISc Bangalore has won a gold medal at the giant Jamboree in the International Genetically Engineered (iGEM) competition, an annual synthetic biology competition organised by the iGEM Foundation. This is the fourth gold medal won by an IISc team at the competition.

This year’s team was recognised for their project ‘CellOPHane’, a bacterial cellulose-based filter designed to combat organophosphate pollution.

The pattern of pesticide usage in India differs from pesticide usage all over the globe. While the global average of insecticides is about 44%, in India, insecticides occupy as much as 76% of the pesticides used. Among the insecticides used, the major class is organophosphates (OPs), which act as neurotoxins for insects. Organophosphate poisoning can have serious consequences for humans who have consumed contaminated food or water, such as attention deficit hyperactivity disorder, drowsiness, lethargy and even cancer. Hence, organophosphates have been banned in many countries, but continue to be used unchecked on Indian soils. Current strategies to tackle organophosphate pollution at the large scale are ineffective and impractical.

Team iGEM-IISc sought to address this lacuna in bioremediation by designing ‘CellOPHane’, a novel bacterial cellulose-based filter to combat organophosphate pollution. The team has also laid a strong emphasis on modularity of their filter. They have thus developed a modular ‘plug-n-play’ platform for degrading other contaminants with minimal modifications. The platform can be used for any bioremediation strategy by just cloning the corresponding enzyme, without having to rethink the design for genetic constructs and the entire filter.

The requirement was to develop a modular enzymatic system that can attach to the bacterial cellulose sheet and catalytically degrade OPs into harmless products. Keeping this in mind, the team decided to design two fusion proteins or “modules” – one module had a Cellulose Binding Domain connected to a docking protein (SpyCatcher) by a linker and another module had a broad-spectrum OP hydrolase (OpdA) connected to a tag (SpyTag), which in turn would bind to the docking protein in the other module. The team could successfully show the reduction in organophosphate load from a solution by using a simple spectrophotometric assay. They also tried to make a sheet of microcrystalline cellulose using MCC powder and have explored other strategies to produce sheets of bacterial cellulose as well. 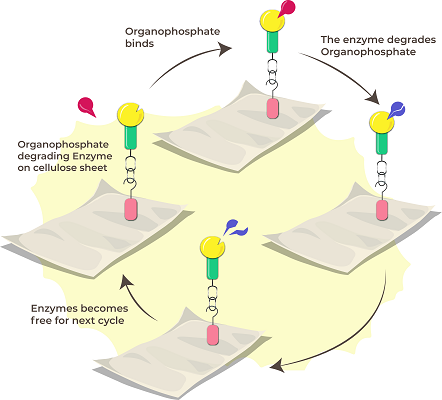 Figure: Degradation of organophosphates by the enzymes functionalized on a bacterial cellulose sheet. Here, the enzyme OpdA has been indicated in yellow while the SpyCatcher has been indicated as two links. The pink rectangle denotes the dCBD and the hook denotes the SpyCatcher. The modularity of the filter design allows any enzyme to be cloned with the SpyTag, and used in the filter while keeping the dCBD-SpyCatcher module unchanged.

For Project ‘CellOPHane’, the team adopted a human-centred design process, working with key stakeholders and end users – including farmers, engineers, entrepreneurs and NGOs – throughout the project lifecycle. They also undertook several initiatives to communicate their work and the science to the general public, including an introductory book on synthetic biology for school students, a manual on biosafety, audiobooks and games to introduce the concept of BioBricks to children, as well as symposia and talks. The all-undergraduate team also created a 2-minute promotional video in various languages (English, Hindi, Bengali, Kannada, Tamil, Malayalam and Odia with subtitles in Telugu and Marathi as well) and a 20-minute presentation video about their project.

The team acknowledges the generous financial support provided by the Director of IISc and the administrative help offered by the Dean of the UG programme. The team is also thankful to the Office of Development and Alumni Affairs for help in raising funds and the alumni of IISc for their generous contributions. The team also expresses its gratitude to the sponsors SnapGene and LabFolder, for providing free access to their software.