Researchers at the Centre for Nano Science and Engineering (CeNSE), IISc, have developed a technique to trap and move nano-sized particles in a fluidic medium using only light.

The nanotweezer technology, developed by PhD student Souvik Ghosh and Ambarish Ghosh, Associate Professor at CeNSE, uses a focused laser beam to trap and manoeuvre a nano-sized silver disk, which in turn can attract and ensnare nanoparticles when light is shined on it.

The study was published in Nature Communications.

The ability to trap and manipulate microscopic objects using light — a Nobel Prize-winning advancement — has led to significant breakthroughs in diverse fields, from atomic physics to biology. These “optical tweezers”, however, are not efficient at capturing particles that are nano-sized. This challenge was recently overcome with the invention of “plasmonic tweezers”, which can trap much smaller particles, such as viruses or quantum dots, at lower light intensities. Plasmonic tweezers use metallic nanostructures such as gold or silver that generate a strong electromagnetic field around themselves when light hits them, and this field attracts and traps nanoparticles.

But plasmonic tweezers have a limitation: unlike optical tweezers, they are typically fixed at a spot and are only able to capture particles close to them. As a result, dynamic control over nanoscale objects in fluids remains challenging. In an earlier study published in Science Robotics, Ghosh and Ghosh managed to transport nanoscale cargo using plasmonic tweezers integrated with magnetic nano-robots. However, due to this hybrid approach, those tweezers were not applicable for certain types of colloids such as magnetic nanoparticles. Additionally, they were unable to move particles with very high precision due to the Brownian (random) motion of the nano-robots themselves. 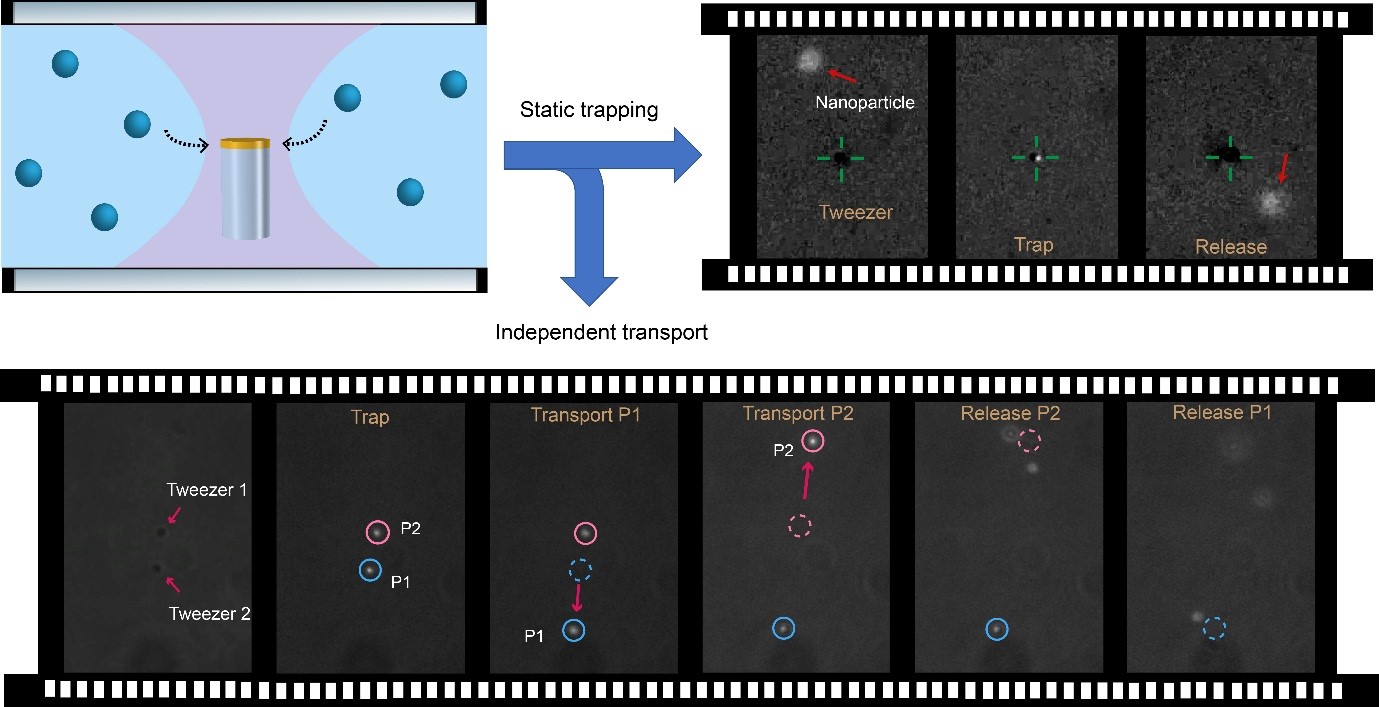 In the present study, the same team has developed an advanced nanomanipulation technique that works on optical forces alone, and is therefore more easily applicable to standard lab-on-chip technologies. They used a nanodisk made of silver as a plasmonic tweezer, and manoeuvred it using a focused laser beam that acted as the optical tweezer. This allowed them to manipulate nanoparticles even in magnetic colloids and biological buffer solutions, while also addressing the Brownian motion-induced limitations in precisely manoeuvring the tweezers.

Previous attempts to trap metallic nanoparticles using an optical tweezer needed high-intensity beams to hold the disk in place inside the colloidal medium. To overcome this challenge, the researchers fixed the silver nanodisk on top of a glass microrod to reduce its random movement. A low-intensity laser beam was then sufficient to trap and move the disk-rod hybrid inside the colloidal medium, capturing and carrying nanoparticles as small as 40 nm along the way. “The approach combines the strengths of two powerful tools: optical and plasmonic tweezers,” says Souvik Ghosh. This unique “tweezer in a tweezer” approach could be used to precisely capture, transport and release particles such as nano-diamonds or quantum dots. As it uses low-intensity light, the approach would also enable non-invasive manipulation of fragile biological specimens such as bacteria, viruses and proteins, the researchers say.

“What we have achieved is the capability of manipulating very, very small particles, with much lower light intensity. This is important for things that can be damaged, such as living cells, or even non-living things where high-intensity beams can heat up the material,” says Ambarish Ghosh.

The researchers were also able to manipulate a collection of particles within the same colloidal medium. Their technique could simultaneously manipulate individual nanoparticles at different locations in the fluid and release them independently at desired places inside the fluidic chamber, a functionality that has not been demonstrated before in optical nanomanipulation.

The simplicity of the approach would allow the plasmonic tweezers to be integrated with advanced optical tweezer systems, for the large-scale manipulation and assembly of nanomaterials such as fluorescent nanodiamonds, quantum dots and nanocrystals in standard lab-on-chip devices, the researchers suggest.