A new study by an international team of researchers, including those from the Indian Institute of Science (IISc), unveils how an unusual form of ferroelectricity arises in certain nano-sized materials. The team includes Pavan Nukala, Assistant Professor at the Centre for Nano Science and Engineering (CeNSE), IISc, and former Marie Curie Research Fellow at the University of Groningen, Netherlands – where a large part of the work was carried out – as well as Tuhin Chakrabortty, PhD student at CeNSE. 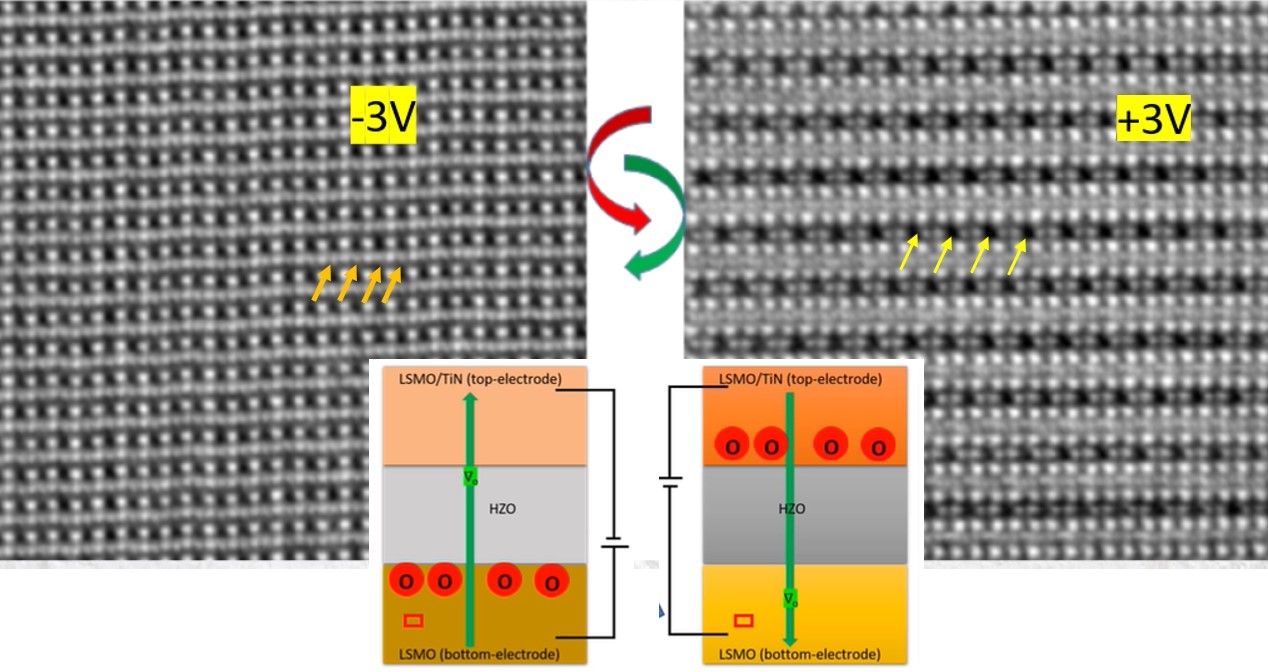 Using state-of-the-art atomic resolution microscopy, they show experimentally for the first time that when an electric field is applied, ferroelectricity arises in materials called hafnia-based oxides due to the displacement and reversible movement of negatively charged oxygen atoms. Such materials are useful for low-power memory applications, according to Nukala, who is one of the corresponding authors of the study published in Science. “Hafnia-based ferroelectric memory devices are already in production, even though the mechanism behind their behaviour was not known,” he says.

Like magnets, ferroelectric materials show spontaneous polarisation – the separation of positive and negative charges – which can be reversed or switched using an electric field. However, they are generally unsuitable for miniaturisation because they lose their ferroelectric properties when the crystal is made smaller than a particular size.

But in 2011, scientists showed that hafnia-based oxides could exhibit ferroelectricity even when they are nano-sized, and that this ferroelectricity in fact grows stronger as the material size gets smaller, opening up numerous opportunities for microelectronics. However, there was no clear understanding of how ferroelectricity happens in these nano-sized materials. Some scientists have proposed compelling theories about why and how these materials switch, but they have not been experimentally proven so far.

Nukala and colleagues used an advanced electron microscopy technique that had recently been developed and earlier used by a research team at the University of Groningen to visualise a hydrogen atom, the lightest chemical element. In the new study, they imaged thin films of hafnium-zirconium oxide sandwiched between two electrodes. They were also able to track the movement of atoms, including oxygen, in real time when an electric field was applied.

The researchers found that charged oxygen atoms move from one electrode to another with the hafnia layer acting as a conduit. When the electric field was reversed, the direction of migration was also reversed. It was this migration that contributed significantly to the material’s ferroelectricity, they found. When the conduit size was reduced (as the device is made smaller), oxygen conduction became more robust. These findings were also confirmed by X-ray diffraction studies carried out in Sweden.

Oxygen migration occurs due to imperfections or “vacancies” in the crystal structure, explains Nukala. “These structural defects are the key to the ferroelectric behaviour, and in general give novel functions to materials.”

Directly imaging the dynamics of light elements using electron microscopy has not been attempted until recently. Among the many challenges was fabricating electron microscope-compatible capacitors made of hafnia. The task of designing these samples was successfully led by Nukala, who believes that the protocols they have developed could help researchers perform similar experiments on other materials.

Another challenge was accurate statistical analysis of the microscopy data. Nukala’s student Chakrabortty, who has been working on statistical inference in biological systems, used image processing tools to establish that the reversible oxygen migration is indeed statistically significant.

The insights offered by the study open up new avenues for designing oxygen-conducting ferroelectric materials that could be used for miniature memory and logic devices.