Strongly correlated electronic systems have kept physicists mesmeriSed over the past few decades because they have the potential to show superconductivity at higher temperatures. The recent discovery of superconductivity in magic-angle-twisted bilayer graphene (MATBG) – two graphene monolayers stacked on top of each other with a rotation angle of about 1.1° – has generated waves in the research community. In MTBLG, the electronic bands are flat, with the velocity of electrons approaching zero. Thus, electronic interactions dominate and give rise to exciting phases like superconductivity, correlated insulators, topological phases, and magnetic orders.

To understand the intriguing phase diagrams, conventional resistance measurement or scanning tunnelling microscopy or compressibility measurements are utilised to probe the electronic structure of MATBG. In contrast, other experimental techniques that provide complementary information have not received much attention. One of those is heat transport measurement like Giant thermopower in magic-angle twisted bilayer graphenethermopower or Seebeck coefficient measurement, which is sensitive to the particle-hole asymmetry of the electronic structure. Now, reporting in Nature Physics, the quantum transport group of IISc led by Anindya Das, Associate Professor in the Department of Physics, and collaborators shed new light on thermopower generation in MATBG.

In a thermopower measurement, passing a current through an isolated heater, which is placed at one side of the MATBG (Fig. 1), creates a lateral temperature gradient between two electrical contacts to the MATBG. By simultaneously measuring the temperature difference and generated electrical voltage between the electrical contacts, one can measure the Seebeck coefficient (S = -V/T). In this work, for the first time, using sensitive noise thermometry, the Seebeck coefficient of MATBG was measured at cryogenic temperature down to 0.1 Kelvin.

The measured thermopower signal is quite striking. A large value of S of 100 μV K−1 at 1 K was observed, which is two orders of magnitude higher than graphene and its hybrids at such low temperatures. Such a large value of S arises from the emergent, highly particle-hole-asymmetric electronic structure due to the interaction-driven quantum phase transition in MATBG. Furthermore, the thermopower response around the superconducting transition points towards the possible role of superconducting fluctuations in MATBG. This is an important piece of work as it highlights the ability of thermopower to provide unique insights into the novel quantum phenomena observed in MATBG, and opens a new route for designing high thermoelectric devices at cryogenic temperatures. 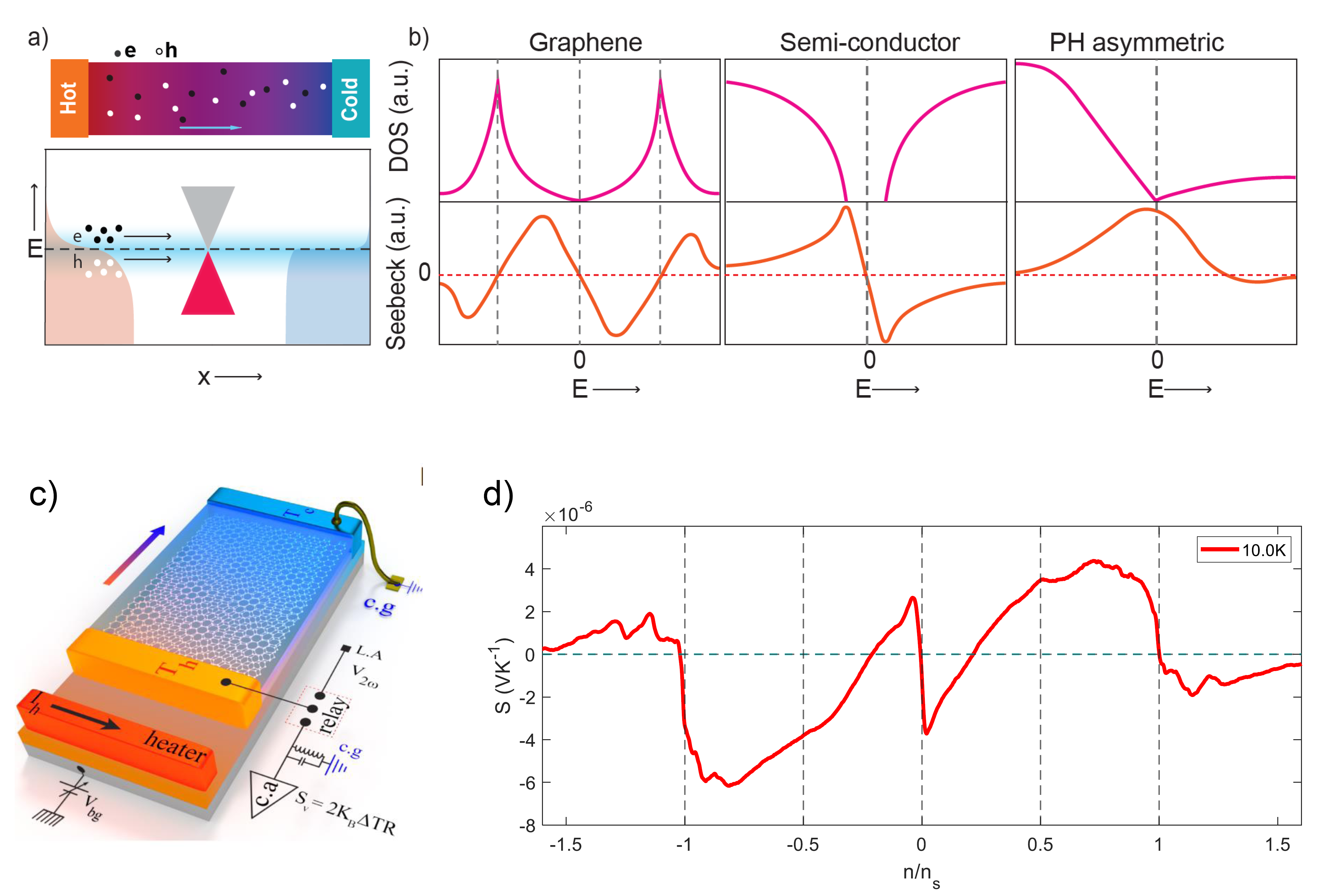 Fig. 1: (a) The diffusion of electrons and holes from the hot end to the cold end, which generate the thermoelectric voltage. (b) Expected thermopower for semimetal like graphene, semiconductor and highly particle-hole asymmetric band. (c) Schematic of the set-up. Passing a current through the heater creates the temperature gradient across the device. Simultaneously measuring the temperature difference and generated thermoelectric voltage across the device, the Seebeck coefficient was measured, which is plotted for MATBG at 10K in (d). 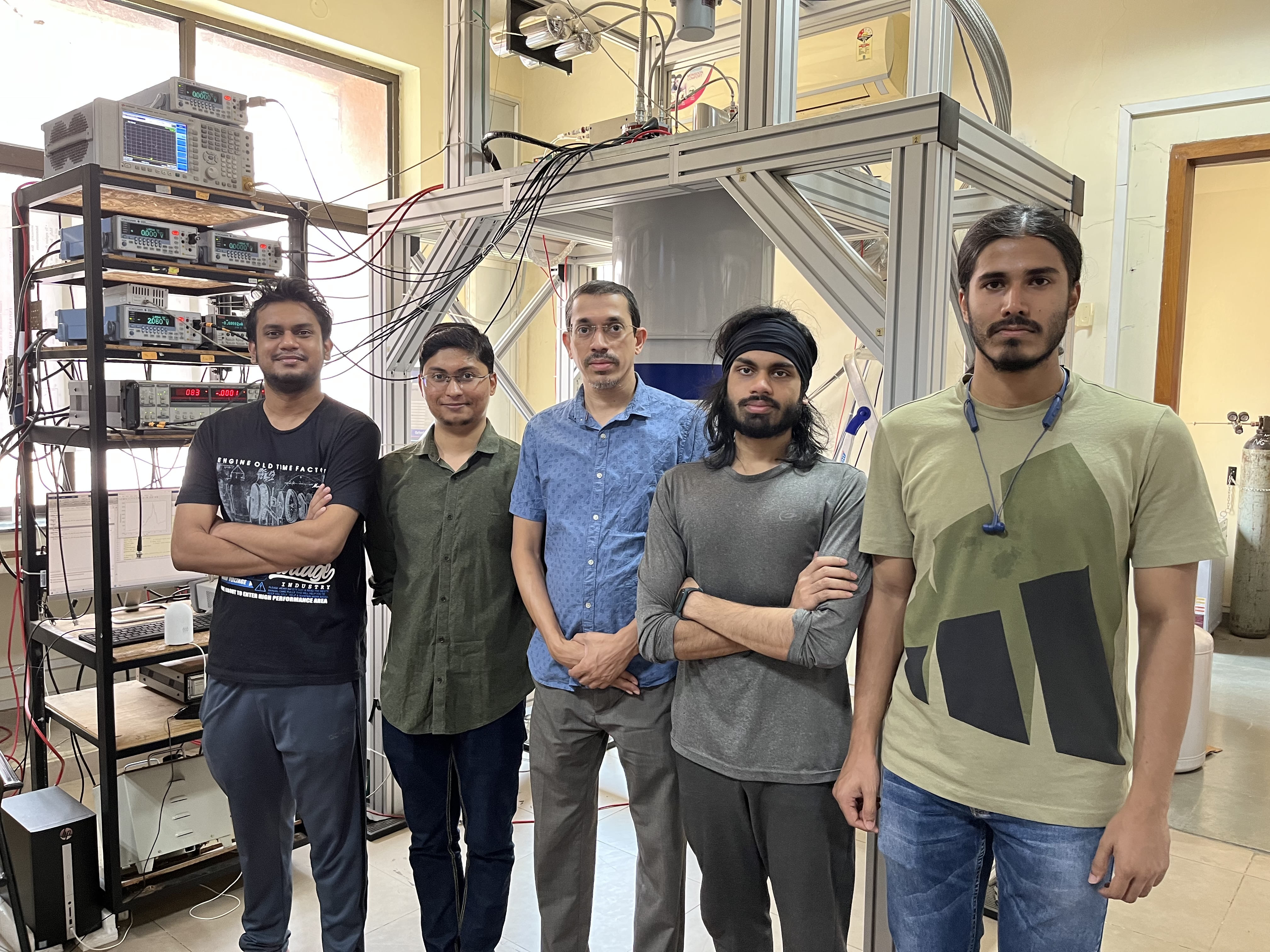