Artificial Neural Networks (ANNs) – a system of interconnected electric circuits or algorithms that communicate with one another just like the neurons in our brain – are gaining popularity for their ability to perform complex tasks, especially in pattern recognition. However, existing devices that mimic neurons and synapses – the junctions between two interacting neurons – operate at high voltages and show variable conductivity, making it difficult to construct efficient ANNs. 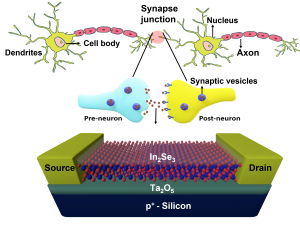 To address these concerns, researchers at IISc have developed an Indium selenide-based transistor that was found to mimic several characteristics of a biological synapse. The team, led by Digbijoy Nath at the Centre for Nano Science and Engineering (CeNSE), fabricated a transistor out of multi-layered indium selenide (In2Se3), and tested its response to sequential voltage pulses, similar to the electric signals in the neurons. 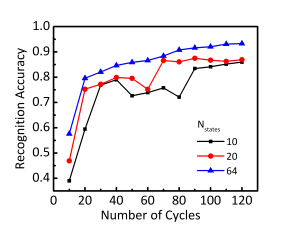 Communication across biological synapses has certain unique signatures. Prolonged activation of a neuron could make the neuron receiving the signal from it (‘post-synaptic neuron’) either more or less responsive to it, depending on the nature of the signal. The post-synaptic neuron also responds differently to consecutive pulses separated by a very short time interval as compared to a single pulse. The output characteristics of the device captured these essential features.

The researchers used the device’s responses to build a computer model which simulated an ANN. When they trained the ANN with a database of handwritten numbers, it was able to recognise 93% of numbers correctly.