Once thought impossible to exist, the recent discovery of 2D magnetism has the potential to transform information technology. The magnetic order of these 2D magnetic materials fluctuates as the temperature rises. When the temperature reaches a critical point – known as the Curie temperature (TC) – the material stops acting like a magnet. Majority of the experimentally shown 2D magnets have Curie temperatures that are much lower than ambient temperature, which restricts their practical use. The digital discovery of 2D magnets with high TC has become increasingly important since the material space is infinite. 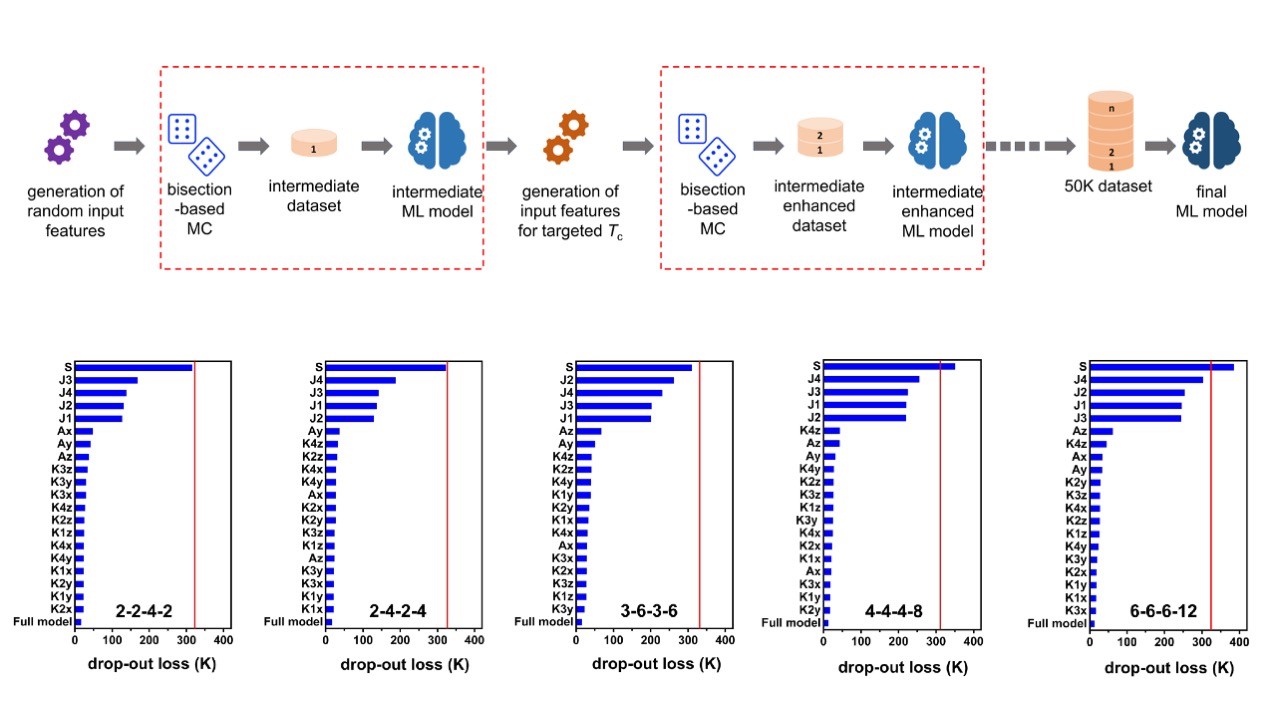 A group of researchers, led by Santanu Mahapatra from the Department of Electronic Systems Engineering (DESE) at IISc, have developed an end-to-end computational pipeline that can predict the Curie temperature accurately using first-principles-based quantum mechanical calculations.

One important component of this pipeline is the Monte Carlo (MC) simulation which captures the temperature-dependent magnetic-order fluctuations. Rigorous MC calculations can be extremely time-consuming, which becomes a limiting factor to cover the vast material space. As an alternative, the researchers developed generalised data-driven deep neural network (DNN)-based machine learning models that can predict the Curie temperature rapidly and accurately.

The main obstacle in developing these models was the absence of reliable datasets on which the models could be trained. To overcome this, the team generated a dataset containing 2,50,000 data points to perform MC simulations in the supercomputer at SERC, IISc. The input space of 20 variables was sampled randomly and uniformly, and then the physically meaningful inputs were fed to their in-house MC code. It is a natural tendency for 2D magnets to have low Curie points, which was also reflected in this random dataset. To generate a near-uniform TC distribution, a concept of data-generation using intermediate ML models was introduced, and the process was coupled with the learning from the data.

The researchers found that the parameters that mainly contribute to the TC are the magnetic moment of the atoms, along with the isotropic exchange terms. In contrast, parameters like the anisotropic terms only provide minor contributions. This clearly contradicts the widely accepted notion that anisotropy stabilises magnetism in two dimensions.

A second independent study, published on the same day, employed a purely physics approach to prove that exchange interactions and the limited size of 2D materials are the two primary determinants for stabilising magnetic order at finite temperature. This demonstrates how, with careful data curation and in-depth analysis, data driven models and scientific models can both come to the same conclusion.