The quest to employ solar based renewable energy has intensified in the past few years because of increased awareness regarding climate change and global warming. In this regard artificial photosynthesis is a very promising approach, since it can directly help capture atmospheric carbon dioxide and convert to a fuel or an industrial feedstock. In this manner, this process acts not just as an energy source but also as a carbon dioxide sink.
While extensive efforts have been made towards electrically assisted CO2 reduction, exclusively photocatalytic reduction remains in a relatively nascent state. In this work we have designed and prepared CuAlS2/ZnS quantum dots that can reduce aqueous bicarbonate ions to formate under visible light. We are able to get high turnover numbers (>7×104 molecules of sodium formate produced per quantum dot) and also solar to chemical energy conversion efficiencies as high as 20%. This efficiency is roughly 100 times greater than what is typically achieved in natural photosynthesis.
The quantum dot “leaf” reported by us offers unprecedented advantages:
(1) It is composed of completely biocompatible, earth abundant, inexpensive elements.
(2) It exhibits very high solar to chemical energy conversion efficiencies
(3) Light harvesting via these materials may be set up to extract the carbon dioxide already present within the earth’s atmosphere.

The high energy-efficiency and the environmentally friendly composition of these materials promise widespread adoption for solar light harvesting. 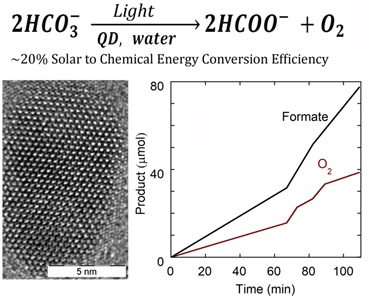 Figure 1: Chemical equation for the process, image of a single CuAlS2/ZnS quantum dot and a graph of fuel and oxygen formation with time.