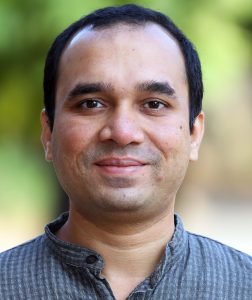 Atoms of elements available in nature like Sodium emit and absorb visible light. The size of a single atom is typically 1000 times smaller than the wavelength of light that it emits or absorbs. This is the case whenever light interacts with an atom or a sub-atomic particle, even when the ‘light’ in question is X-rays or gamma-rays. What if the atom is 1000 times BIGGER than the wavelength of the ‘light’ it emits or absorbs? A new research published in Nature Physics titled “Non-exponential decay of a giant artificial atom” experimentally realizes such a scenario. By using a superconducting circuit that behaves as an ‘artificial atom’ and by probing it with ‘sound waves’ on the surface of a solid, the researchers have, for the first time, realized a giant atom regime of light-matter interaction. In particular, they show that such a giant atom will reabsorb the light that it emitted after a finite time interval. Dr. Baladitya Suri, a co-author on this work, is currently Assistant Professor in the Department of Instrumentation and Applied Physics department at IISc, where he helms the Quantum Technologies Laboratory. This work was carried out at Chalmers University of Technology in Gothenburg (Sweden) where Dr. Suri was a post-doctoral researcher between 2015 until 2018, when he joined IISc.  For more details, see https://www.nature.com/articles/s41567-019-0605-6 .