What is an endoscopy simulator?

Endoscopy is a medical procedure to examine the interior of a body by inserting a tube with a camera attached to it. Clinicians who perform this highly skilled procedure need to learn high degree of hand-eye coordination and several sessions to master it. Learning this skill using human patients is risky and can be avoided if a simulator is available. The purpose of an endoscopy simulator is to train clinicians without using animals and human patients in virtual reality environment with graphical visualization and haptics (virtual touch). A simulator of this kind has uses other than training: they help bridge the spatial and temporal gap between the patient and the doctor and is useful in remote medical diagnosis and treatment.

The idea of an endoscopy simulator came about in a brainstorming meeting organized by Asian Institute of Gastroenterology (AIG), Hyderabad, back in 2011. Dr. Nageswar Reddy, Dr. G. V. Rao, Dr. Pradeep Rebala and other doctors at AIG encouraged the IISc team led by Prof. G. K. Ananthasuresh (Mechanical Engineering, IISc) to develop a training platform for endoscopy. Supported by a research grant from the Robert Bosch Centre for Cyber Physical Systems (RBCCPS) in IISc, the collaborative effort began between the groups of Prof. G. K. Ananthasuresh and Prof. Vijay Natarajan (Computer Science and Automation, IISc) along with gastroenterologists of AIG. Dr. Shanthanu Chakravarthy pursued the design, prototyping, control, haptics, and simulation of an endoscopy simulator as part of his doctoral research in Mechanical Engineering, IISc. Drs. Nithin Shivashankar and Dilip Thomas, both PhDs from CSA-IISc, built the visualization system for the simulator. These and several project staff members worked with clinicians at AIG and Dr. K. Lakshman of Rangadore Hospital-Bengaluru, to build a working system for a upper GI endoscopy simulator. Subsequently, Dr Shanthanu Chakravarthy, Dr Nithin Shivashankar, Raghu Menon (MDes from CPDM, IISc and an EiR at the Design Innovation Centre at CPDM), and G. Balaji (a former project assistant in IISc) founded Mimyk and incubated in SID-IISc to commercialize EndoMimyk. Funding for Mimyk came from the Biotechnology Ignition Grant (BIG) of BIRAC-DBT and Idea2PoC grant from the Department of IT-BT and S&T, Government of Karnataka.

The burden of GI ailments

“All disease begins in the gut”, said Hippocrates couple of millennia ago. Developing countries such as India shoulder a considerable burden of gastroenterological diseases. As noted by Dr. Nageshwar Reddy (AIG-Hyderabad), among India’s population of over one billion people, 30% suffer from gastrointestinal (GI) ailments. This is twice as many as the number who suffer from diabetes in India. However, there is a considerable deficiency of trained doctors to tackle gastrointestinal diseases. Virtual Reality (VR) together with haptics offers an immersive, flexible, and cost-effective method for training doctors in endoscopy procedures.

GI endoscopy, including upper endoscopy and colonoscopy, procedures are critical for diagnosis and treatments of gastroenterological diseases. These complex procedures require a high degree of medical knowledge, clinical skills, and hand-eye coordination. Currently, outside of clinical encounters, there are limited effective methods to train novice doctors in endoscopy procedures. Available computer-based simulators do not include force-feedback and they lack realism. In view of this, an affordable and immersive endoscopy simulator made available for trainee doctors will cater to patient-safety and will have a large societal impact. A simulator improves patient-care by providing a structured, low-risk training environment. High-fidelity graphical visualization and haptics are crucial components of a simulator that provide the same experience for a trainee without a patient.

Haptics is a fast-emerging technology that offers immersiveness while interacting with virtual environments. Sophisticated haptics technology can be difficult to incorporate into training systems. Most medical training systems on the market do not offer active haptics in their simulators. EndoMimyk is a novel system consisting of a haptic interface, VR-models, and instrumented tools. Proprietary control algorithms and physics-based simulations are used to integrate these modules resulting in a high-fidelity, realistic, and immersive training system in GI endoscopy. Figure 1 shows the flow of information in the simulator.

Figure 1. Block diagram showing the flow of information in the endoscopy simulator

The simulator system has three degrees of freedom (DoFs) and kinematically mimics all the motions necessary to simulate endoscopy. DoFs in an endoscopy procedure are illustrated in Figure 2. 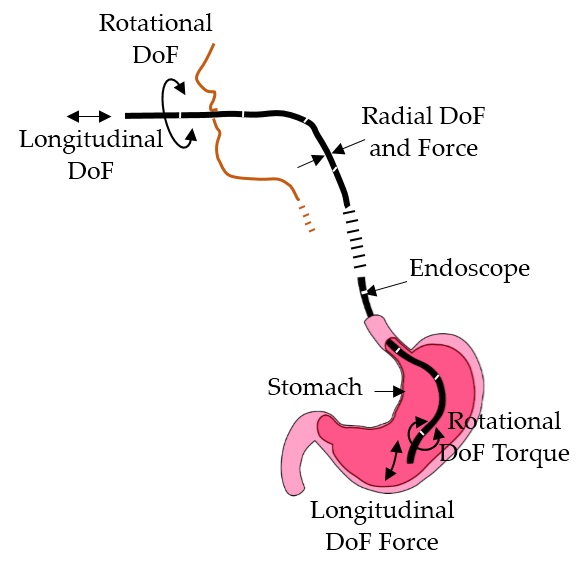 Figure 2. Illustration of longitudinal, rotational, and radial degrees of freedom

The system employs haptic-integrated VR technology developed at IISc for immersive simulations. The interaction models are physics-based and are being developed to work with real-time haptic interaction. These physics-based models provide realistic rendering and are superior to graphic-only scenes provided by the competitors. Screenshots for the developed simulation are shown in Figure 3.  Furthermore, rich medical content and training modules are being developed for upper and lower-GI endoscopy that accompany the hapto-VR simulator. These modules will introduce best practices is endoscopy training. Figure 4 shows the concept visualization of the Endoscopy Simulator Product being developed. The team is working towards a unique user-centric design for state-of-the-art training in endoscopy. 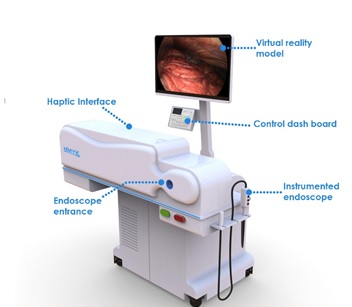 Two patents and two Patent Cooperation Treaty (PCT) have been filed for this work. The technology developed in this system can also be easily extended for many other interventional procedures in the future (bronchoscopy by pulmonary and intensive care physicians, cystoscopy by urologists). The long-term vision of Mimyk is to leverage the base technology to develop medical simulator solutions in clinical applications.

Ravi Kumar and Project Staff at Mechanical and CPDM Workshops