Effects of climate change and anthropogenic activities on the Ganga basin

The Ganga is the lifeline of more than half a billion Indians. Anthropogenic activities – activities driven by humans – have had disastrous impacts on this river, from severe pollution to changing its course. Catastrophic landslides and floods in the Ganga basin have become more frequent in recent years. 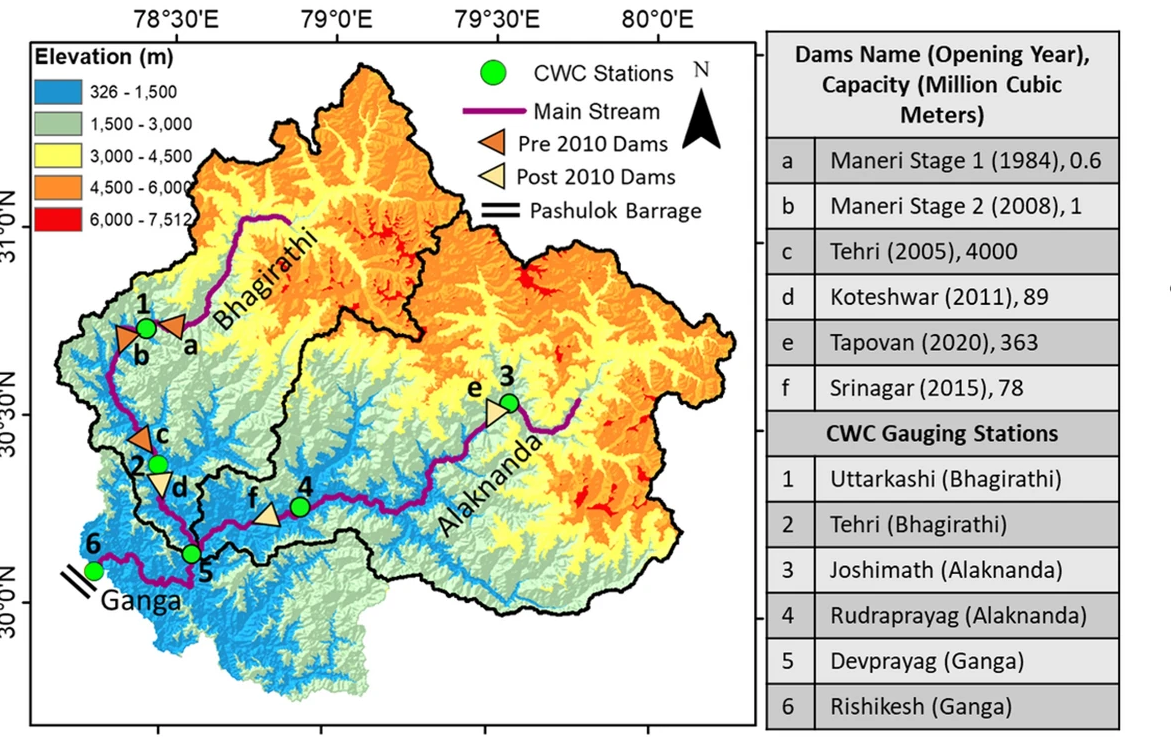 The study area in UGB. The triangles represent dams and the green circles represent the weather stations that provided data for the study. Credit: Swarnkar et al.

A new study published in Scientific Reports by researchers at the Indian Institute of Science (IISc) and the Indian Institute of Technology, Kanpur (IITK) provides insights into how climate change and anthropogenic activities like building dams affect the region. It analyses the effects of past human activity on the mountainous regions, focusing on two major tributaries, Bhagirathi and Alaknanda, which merge at Devprayag to form the Ganga.

The researchers examined data on rainfall, water discharge in the rivers, and sediment load from weather stations across the Upper Ganga Basin (UGB) corresponding to the years 1971-2010. They analysed the data corresponding to two periods: pre-1995 and post-1995. What they found was a steady increase in the number of flooding events in both river basins after 1995. Further, the change in low flows and middle-level flows in Bhagirathi can be attributed to three major dams – Maneri, Tehri, and Koteshwar – on the river, they say.

The Alaknanda basin saw a doubling of water flow from 1995 to 2005 at the Joshimath weather station. There has also been an increase in the rate of flow of water, termed extreme flow. “We observed that Alaknanda basin has a high, statistically increasing rainfall trend, unlike the Bhagirathi basin. Most of these trends were observed in the downstream region of the Alaknanda. Therefore, we have also seen an increase in [the] magnitude of extreme flow in these regions,” says Somil Swarnkar, a postdoctoral fellow at the Interdisciplinary Centre for Water Research (ICWaR), IISc, and first author of the study.

In recent years (after 2010), the building of dams in the Alaknanda region might have modified the water activity in addition to climatic changes, the researchers suggest. Dams and reservoirs have influenced the sediment transported by the rivers. Due to abrupt changes in water flow, sediment depositions in the upper reaches of the Ganga have led to changes in the sediment composition downstream. The study reports that the Tehri dam plays a crucial role in the UGB region. Being a large reservoir and flow control structure, it blocks sediment flow from upstream and controls the volume of water that flows downstream. The study also points to the positive role of the dams in reducing the flood peaks downstream of the dams.

There are currently 11 new dam projects planned in the Bhagirathi basin and 26 in the Alaknanda basin. While they may provide the much-needed hydropower to the region, these structures will likely affect the water flow and sediment transport processes in these regions, says corresponding author Pradeep Mujumdar, Professor in ICWaR.

The paper also predicts a further increase in the magnitude of extreme flows and in the occurrence of floods in the Ganga basin. However, advances in technology and new types of hydraulic structures can make a difference. For example, the Pashulok barrage in Rishikesh has helped prevent floods and reduce extreme flows in downstream regions. Informed planning and decision-making driven by computer models can also help. “We do not have control [over] what happens in the atmosphere. But on the ground, we have control. Flows can be predicted using hydrological models. With this knowledge, we can develop both structural and non-structural responses to mitigate [such] high flows,” explains Mujumdar.