A ventilator can be a life-saver for patients whose lungs are damaged by the COVID-19 infection. But India, like all countries grappling with this pandemic, is likely to face a large shortage of ventilators. Manufacturers are unable to source key components such as sensors and flow controllers from abroad due to the current disruptions in global supply chains.

To address this shortage, a team of engineers at the Indian Institute of Science (IISc) is currently building a prototype of an electro-mechanical ventilator from scratch, using only components found or made in India, based on guidelines issued by the UK Medicines and Healthcare products Regulatory Agency. It is expected to be ready within the next couple of weeks. “We are building it so that anyone can use it free of cost,” says TV Prabhakar, Principal Research Scientist at the Department of Electronic Systems Engineering (DESE) and one of the founders of the project.

“For the last 10 days, we have been working day and night to get this technology going,” says Gaurab Banerjee, Associate Professor at the Department of Electrical Communication Engineering and one of the project coordinators. “We hope that by the end of April, manufacturers can have their own prototypes done, which they can scale up very quickly.”

There are currently about 40,000 ventilators available across the country, but if the number of severe cases surges, several thousands more may need to be produced very quickly.

Patients with severe COVID-19 infection have inflamed or damaged lungs that struggle to receive sufficient oxygen. When doctors put them on a ventilator, the machine critically assists lung function, feeding the patients a controlled mixture of air and oxygen and buying their body time to fight the infection.

A well-designed ventilator has built-in sensors and actuators that allow doctors to set the volume and pressure of gas delivered to the patient precisely, which depends on the severity of their illness. But many ventilator components are currently not manufactured in India. This prompted the IISc team to build some components and co-opt others. To store and mix air and oxygen, for example, they simply reused sedimentation tanks found in household RO water purifiers. “The mixing process that we have come up with has parallels to those in gas turbines and industrial burners, where the ratio of fuel and oxidizer is carefully controlled,” says team member Pratikash Panda, Assistant Professor at the Department of Aerospace Engineering.

To check pressure levels, the team used sensors similar to those used to detect air pressure in car tyres. Controlling the pressure at which gas is pumped into the patient’s lungs is crucial, akin to how using an industrial pressurized hose to water plants instead of a garden hose can cause severe damage. The team is also developing a flow rate sensor, which shows exactly how much air is flowing into the patient’s lungs, from scratch. “By using fundamental concepts of fluid and gas dynamics, we are able to accurately estimate and control the pressure, volume, and oxygen concentration of the air delivered to the patient,” says team member Duvvuri Subrahmanyam, Assistant Professor at the Department of Aerospace Engineering.

The team is also getting inputs from doctors to simplify the interface and create a dashboard preloaded with approved settings. This would allow it to be operated quickly in an emergency even by untrained technicians or nurses. “They would just have to press a button that says pneumonia or Acute Respiratory Distress Syndrome (ARDS), and all the settings will come up by default within a certain range,” says Banerjee.

The researchers are already working with potential manufacturers to check the inventory of critical components before including them in the final design, according to team member Manish Arora, Assistant Professor at the Centre for Product Design and Manufacturing.

The project was initially started by Banerjee, Subrahmanyam, Prabhakar, Panda and HS Jamadagni (former Professor, DESE) at IISc, as well as a Bangalore-based engineer, Manas Pradhan. It has also received technical inputs from nearly 100 volunteers. Companies such as Bharat Heavy Electricals Limited (BHEL) have expressed interest in supporting mass production. The Centre for Nano Science and Engineering at IISc has already provided the team with indigenously developed oxygen and pressure sensors. The team also hopes to leverage the Centre’s nanofabrication facility to scale up production of these sensors. 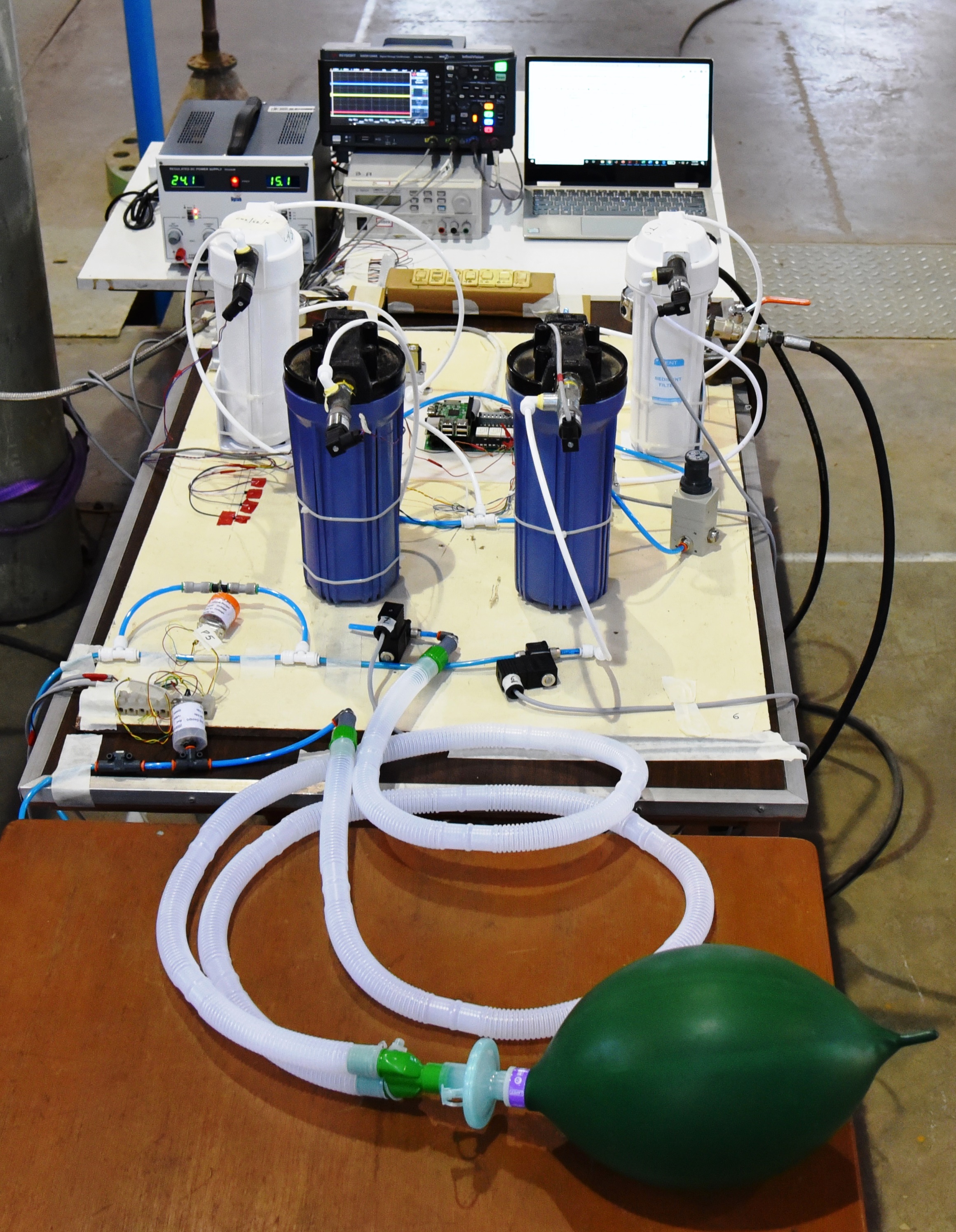 A bench-top test setup assembled at the IISc high-speed wind tunnel complex to experimentally test ideas and concepts during the ventilator prototype development phase. A “test lung” (seen on the bottom right of the image) is used in these experiments to roughly mimic a distressed human lung. (Test lung courtesy of Narayana Hrudayalaya).

a) We typically provide the contact details of the researchers along with press releases. However, in this specific instance, as the team is currently working round the clock to finalize the prototype, they are unable to provide any further comments at this point. We sincerely apologize for the inconvenience.

b) If any of the text in this release is reproduced verbatim, please credit the IISc press release.

c) For any queries about IISc press releases, please write to news@iisc.ac.in or pro@iisc.ac.in.