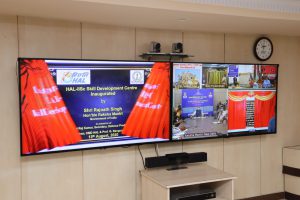 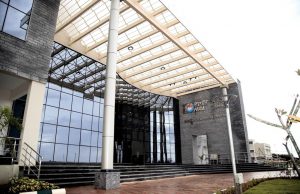 Hindustan Aeronautics Limited (HAL) is a premier aeronautical complex in Asia with 20 production divisions and 11 R&D centres spread across seven states and nine geographical locations in India. HAL’s expertise encompasses design, production, repair, overhaul, and upgrade of aircraft, helicopters, aero engines, accessories, avionics, and systems. The Government of India has disinvested 10.03% equity of HAL, and HAL got listed on BSE and NSE on March 28, 2018.

HAL’s manufacturing divisions are equipped with modern infrastructure for production of fighter aircraft, trainers, transport aircraft and helicopters. The current workforce is around 28,000 with over 50% having more than a decade of aircraft industry experience. The Company has also diversified into manufacture and repair/overhaul of Industrial and Marine Gas Turbine engines, and manufacture of structures for satellite launch vehicles.

HAL has so far designed and developed 17 types of aircraft/helicopters, the latest being Hindustan Turbo Trainer (HTT)-40 Basic Trainer Aircraft and Light Utility Helicopter (LUH). The other major ongoing indigenous platforms are single engine multi role Light Combat Aircraft LCA – Tejas, Light Combat Helicopter (LCH), Advanced Light Helicopter variants ALH Dhruv, ALH Rudra etc. In addition to design and development of aircraft, HAL has also developed expertise in aircraft upgrades. In the aero-engine side, HAL is currently working on the design and development of 25 kN turbofan engine (HTFE-25) suitable for business jets, trainers, etc. and the 1200 kW turbo shaft engine (HTSE-1200) for use on helicopters. The UAV programs (both fixed wing and rotary UAVs) are also underway. A Strategic Business Unit (SBU) has been set up for UAVs.

The Indian Institute of Science (IISc) was established in 1909 by a visionary partnership between the Industrialist Jamsetji Nusserwanji Tata, the Maharaja of Mysore, and the Government of India. Over the 111 years since its establishment, IISc has become the premier institute for advanced scientific and technological research and education in India. Since its inception, the Institute has laid a balanced emphasis on the pursuit of basic knowledge in science and engineering, as well as on the application of its research findings for industrial and social benefit.