cordially invites you to the

ALL ARE WELCOME to attend online through their Institute login

Modern drug therapies offer great hope for psychiatric illness, albeit certain limitations. There is a continued search for alternative and complementary therapies. This search has brought us to Yoga as therapy. When used in psychiatric disorders, Yoga has shown promise as a sole or adjuvant therapy. In depression, yoga has significant therapeutic effects when used alone or with drugs. In schizophrenia, yoga helps patients who are on maintenance drug therapy. There are other conditions like autism, somatoform pain disorder, drug use disorders, anxiety and OC disorders, where yoga holds promise. However, the existing evidence needs more strength. The challenges of blind rating and unavailability of a suitable ‘placebo yoga’ in research are limitations to mainstream Yoga in clinical practice.

Researchers have been examining objective parameters of yoga as a possible answer to these challenges. The biological markers of yoga effects can be classified as neurophysiological, neurochemical and neurostructural ones. Yoga improves the amplitude of the cognitive event related potential P300 in depression. Cortical silent period (CSP) measured using TMS & EMG increases following yoga in both healthy and depressed subjects. CSP is a measure of brain GABA activity and results suggest that GABAergic enhancement follows yoga. ‘OM’ chanting, used as part of a yoga module, deactivates certain limbic structures as would happen after vagal stimulation. This is demonstrable using fMRI and supports biologic basis of ‘calming’ effect of yoga. In the brain, connectivity in circuits is enhanced by Yoga. In patients with schizophrenia, along with improvements in social cognition, Yoga increases oxytocin levels in the blood. In depressed individuals, yoga reduces serum cortisol and this is associated with increases in BDNF. This lends support for the anti-stress and neurotropic effects of Yoga. Six-month practice of yoga in senior citizens with MCI has led to improvements in neurocognition as well as increases in the hippocampal grey matter. Together, yoga effects in psychiatric conditions have biological corroboration. Yoga deserves to be applied as a potential adjunct to clinical practice.

Dr. Gangadhar, who is also a Senior Professor of Psychiatry, brings over 30 years of extensive experience in the field of mental health. With his primary research interests spanning Electroconvulsive Therapy (ECT), Schizophrenia, Community Psychiatry, Public Health and Yoga, he has guided 50 MD students and PhD scholars. He has more than 300 research publications. He is the co-editor of the Asian Journal of Psychiatry. He has also served as the Associate Editor of Acta Psychiatrica Scandinavica (2002-2013). He has been awarded Padmashree this year.

He has served NIMHANS in various capacities such as Medical Superintendent; Head, Department of Psychiatry; Dean (Behavioural Sciences) and Program Director/Head, Advanced Centre for Yoga. He is a Fellow of National Academy of Medical Sciences (FAMS) and received D.Sc. from SVYASA Yoga University for his research work on Yoga and Mental Health. He is also the recipient of Sir CV Raman Award and Doctors Day Award from the Government of Karnataka. 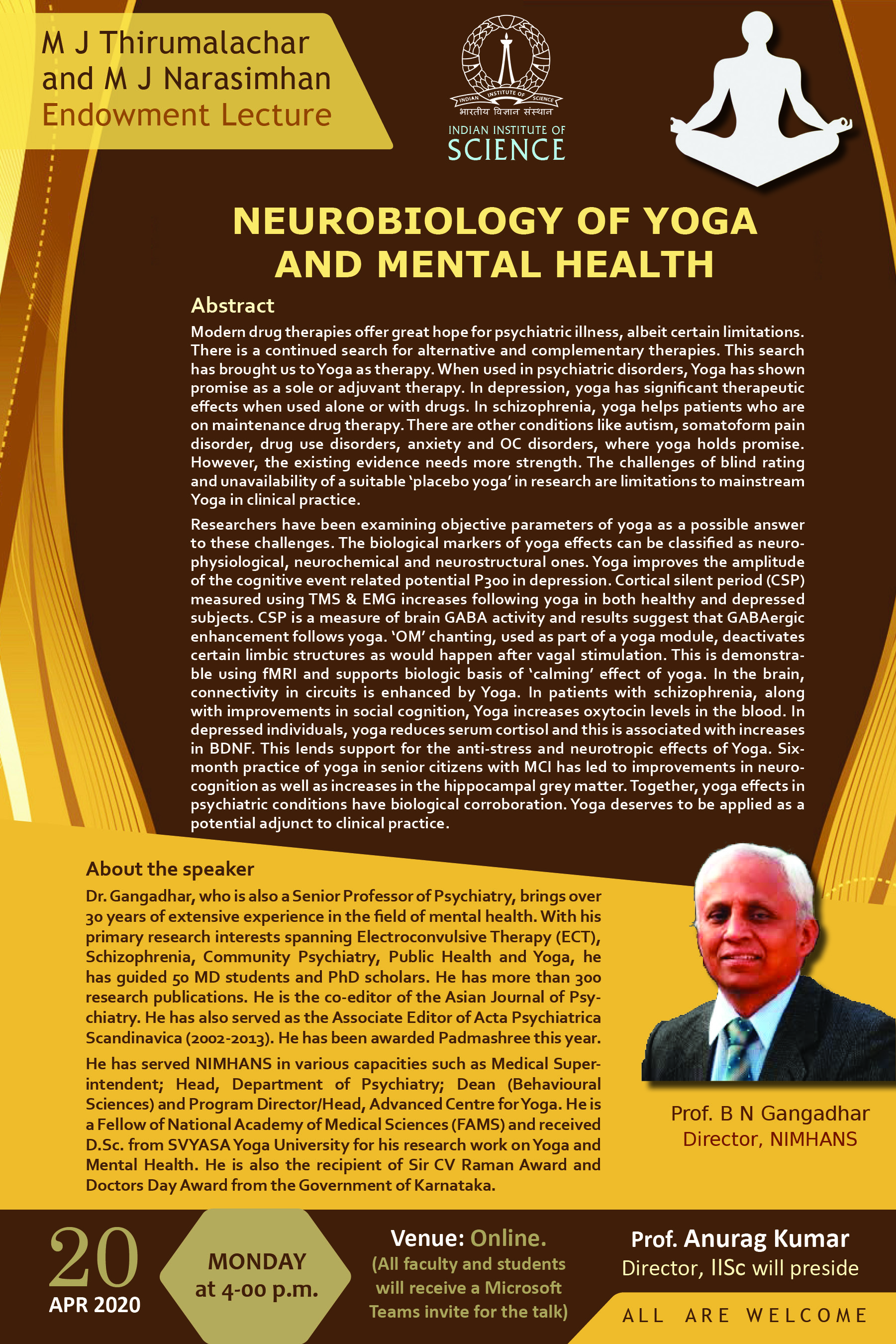