Tell-tale signs of cell state from the nuclear morphology

Despite the heterogeneity in different types of biological cells, there are certain inherent common features in all of them. Some of it is due to various forces experienced by cells and their inner parts. For example, the shape and size of the nucleus of an adherent cell is mostly governed by the osmotic pressure difference between cytoplasm and nucleoplasm, the elastic properties of the nucleus, and cortical tension from the cell membrane. The resulting nuclear morphology has much to reveal about the state of the cell and its function. Altered nuclear morphology is indicative of disease states, including that of cancer and laminopathies.

In a recent collaborative study led by Prof Sreenath Balakrishnan (IIT Goa, formerly a PhD student at IISc) and Prof GK Ananthasuresh (Department of Mechanical Engineering, IISc), it was found that the shape of the cell nucleus has distinct telltale signs that reveal the extent of cortical actin tension (which squeezes the nucleus) and the elasticity of the nuclear envelope (which resists the squeezing). These two opposing effects decide the shape and size of the nucleus.

Using mechanics-based modeling of flattening of an inflated sphere, a relationship was derived to correlate the volume, surface areas, and projected area of the deformed sphere (nucleus). This analytical relationship is visualised as a surface in the 3D space of volume, surface area, and projected area of the nucleus. Two non-dimensional parameters were derived to quantify the shape (flatness index) and volume (isometric scaling) on this surface. Tests with multiple cell lines indicated that all nuclei obey this physical law as they lie as points on the analytical surface. The location and the orientation of the segregation of points indicate the cell type and state. Any shift of the points on the surface indicates a perturbation of the cell, which is indicative of a disease or some change in cell state. Therefore, this paves the way for mechanodiagnostics using only confocal microscopic images of cell nuclei.

The points corresponding to nuclei of five different cell lines lying on a surface that related volume, surface area, and projected area. It can be seen that cell lines maintain constant flatness index and variable size index. 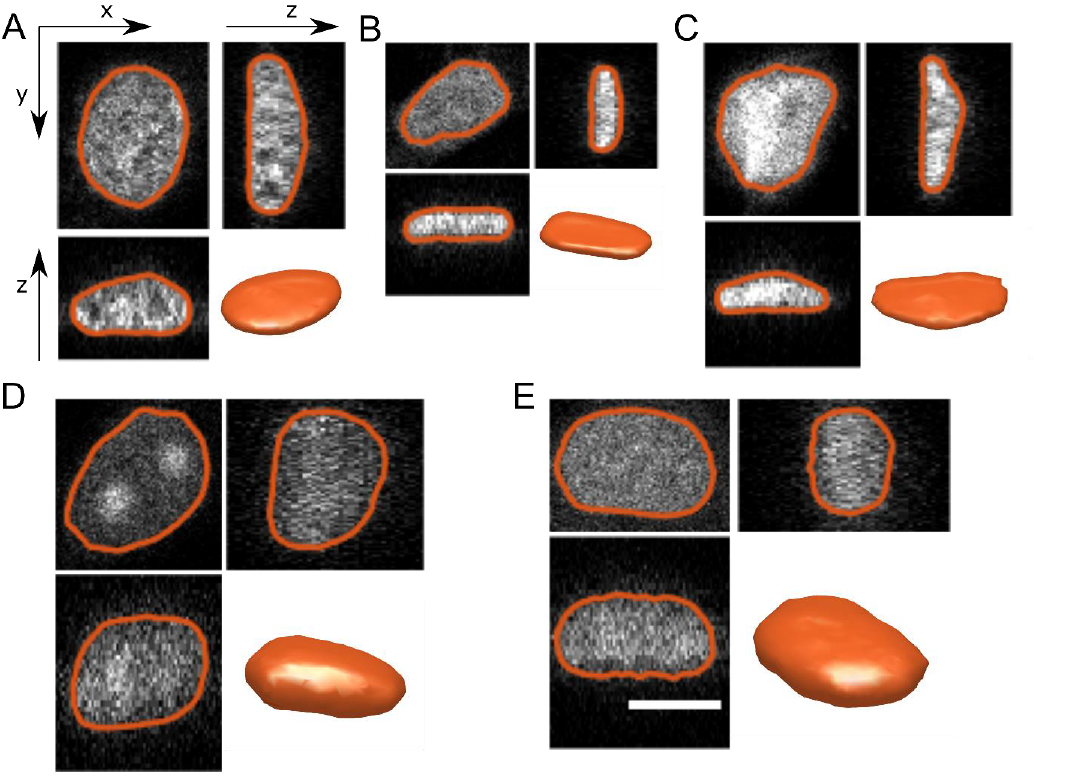 Computing the surface area and volume of nuclei from confocal images. Three orthogonal sections from the confocal stack of nuclei of (A) 3T3, (B) MDAMB, (C) HeLa, (D) MCF7 and (E) Huh7 cells. The contours of the nuclear surface at these sections and a 3D rendering of the nuclear surface is also shown. All images have the same scale and the scale bar represents 10 μm.