Researchers are constantly on the lookout for new classes of materials with novel electronic properties. Topological insulators (TIs) are of particular interest. Insulators conduct electricity poorly due to the large energy gap between their valence and conduction bands. TIs are special: they have a energy gap in their bulk structure, but support highly conductive states at the edges or surfaces.

An important property of 2D TIs is a robust spin texture of the edge/surface states, which prevents backscattering of electrons and allows them to travel quickly and freely (called ballistic transport). The edge states can also be turned ‘on’ or ‘off’ using an electric field, temperature or mechanical strain. 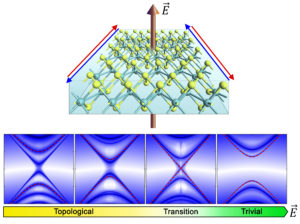 It is highly desirable to devise a method to control this electron transport – a feature particularly useful for field effect transistors. One way is to engineer the physical dimensions of the material. An interdisciplinary IISc team led by Prof. Santanu Mahapatra, Department of Electronic Systems Engineering, has now theoretically demonstrated this scheme for well-known 2D TIs called 1T’ transition metal chalcogenides.

Using atomistic simulations and analytical calculations, they accurately captured the effect of an electric field applied to turn the edge states ‘on’ or ‘off’, and investigated the effect of confinement on the edge state spectra in these materials. They found that the infinite geometry of the materials makes it impossible to modulate edge state electron dispersions, no matter how strong the applied field is. However, a finite width of the material opens an energy gap in the otherwise gapless edge state spectra which can be modulated by the electric field. Further research can foster the development of new spintronics devices and utilization of exotic quantum phases.